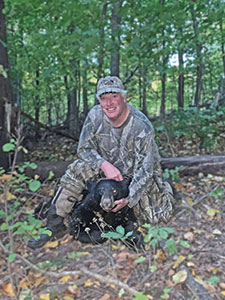 Living in the hills and valleys of Bluff Country, we sometimes hear stories of bear being sighted in the area.  It most cases, it appears that the bear is just moving through the area while looking for a mate.

Randy Hoekstra of rural Lewiston, Minn., in western Winona County, was wishing that was the case when he first start seeing pictures of a black bear from the trail cameras on his property.

He had been suspicious of a bear being nearby, saying, “We were out scouting the end of June, beginning of July, out in the bean fields where we can walk around the neighbor’s cornfield and I can see my 40 from there, so I go out there and watch for deer and see if any come out – and that was beans in front of us, between us and my 40, and I just happened to see this round circle (in the beans).” 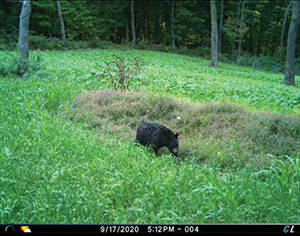 He told his wife Vickie of his suspicions and went and looked around for hair, claw marks, or any other sign of a bear.  He didn’t find anything.

Then the end of August they were out there again and he told his wife he was just going to go out in the beans and walk around a little bit to check for any more signs.  “I found another circle.  And when they do their rolling it’s the size of a pickup, a big circle – there was no grass in there, no weeds – nothing grew,” he explains.

“I got down on my hand and knees that time and I said this has got to be a bear. But, I couldn’t find hair – nothing. We just saw some deer tracks go through it,” says Hoekstra, but he knew this mark was not from deer.

“We went up there the next weekend and looked on the ground for marks or anything and never found a thing.  Then about two weeks after that we went up there. We have a water tank up there, and were filling it and we went for a walk,” he states.

That is when they noticed the neighbor’s cornfield.  “It was probably two acres knocked down, on a corner, I mean, it was a huge area.  I went up there looking for turkey feathers, coon droppings – anything – and I couldn’t find anything,” he explains.

“What puzzled me was that the corn was flat to the ground.  If a coon or turkey goes up a stalk until it tips over, then they can sit on the ground and eat it, so it’s broke off this far up – this stuff was flat,” says Hoekstra.

He was telling people at work about this discovery and they said that was evidence of the bear. They explained to him that bear have gnats and other things on their backs and that’s how they get them out. “Burdocks and stuff like that, it itches – so they roll,” states Hoekstra.

Hoekstra told Vickie that, “this has got to be a bear…  I hope not, because I don’t like bear, and I don’t want to meet them at 4:00 in the morning when I’m walking through the woods.” And, that was not his only concern.

“I let everybody know that that bear was around here – just because the neighbor’s kids go back there and check on crops and stuff on the four wheeler. I don’t know how aggressive bears are,” states Hoekstra.

“I’ve never hunted them, never wanted to hunt them, had no interest in bears,” he notes. 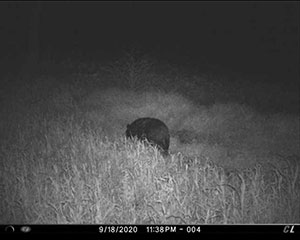 Then, he didn’t see anything else until that next Tuesday at 3:00 in the afternoon. That’s when he got on the computer – if there was a way he could hunt him, Hoekstra planned on it.  After finding out it was possible, he purchased a license.

“You have to register it as a bear sighting because this is a no-quota zone, so the first thing you have to do is register it,” states Vickie.

Although he had some people tell him he should put food around where the bear had been spotted to bait him in, Hoekstra thought, “He’s coming in to my water tank; I think the best thing I can do is stay out of there,” which he did.

“That Thursday, winds were to be out of the south, and that would have been a perfect wind for the stand that I had to be in.  So I went up there; the winds were out of the northeast, so it wasn’t bad, because I kind of knew where he would be coming from because the one picture showed where he went.  I never saw him (that day),” explains Hoekstra.

“That Friday after work, I said I’m going to try one more time because they said it was supposed to be south winds again.  When I got up there the south wind was perfect,” he states.

“He came out at 6:20 p.m.  He sat at my water tank, and I had the cross hairs of my muzzleloader on him, but I have a berm behind my water tank so any water that comes down that hill, that berm catches and runs it into my water tank so it fills it naturally, so he was behind that berm and I could only see that much of his back,” he explains.   “He was there for the longest time and I thought he was going to jump in the tank because on one of the pictures I have, the hair on one side of him is really nice and the next picture he’s walking away all wet.  He didn’t jump in, he just sat there and drank a few minutes and then he went straight to my right,” states Hoekstra.

“I got the cross hairs on him when he was walking away and I drilled him.  I hit him once and he took off.  I’m used to whitetails – when you hit them and hit them hard, they give you that lunge, and then they take off – he never broke stride,” he says.  He was approximately 55 yards away from the bear when he made the shot.

“I thought, there’s no way I missed him,” says Hoekstra.  The bear went about five yards in the woods, got behind a massive oak tree, and he sat down, and Hoekstra couldn’t figure out what the bear was doing.

“So about 45 seconds later it dawned on me that I probably should reload.  I have these powders that you put in your muzzleloader first. They are hard-shell powders, and three of them went to the bottom of the tree because I was shaking so bad, but I did get them in there,” he states.

“I got reloaded, then I lifted it up and I couldn’t find him in my scope because I was shaking so dog-gone bad!” Hoekstra says, chuckling.

“Well, he had gotten up, and he started walking away, so I put my shoulder against the tree and I lifted again and I found him again – he never lunged, but took off running,” he explains.  At this point he tried calling his wife and his buddy Kevin Meyer, who lives nearby, but he had no cell phone service.

“So I reloaded, got down out of the stand, I went up into the food plot a little bit and then I had service and I called her,” says Hoekstra.  She asked if he had seen the bear.  “I’ve got two rounds into him so far,” he told her.

“So, I said you jump in the Ranger and run over to Kevin, and pick him up – I’m going to call him right now to see if he can come up here and help me,” he said to his wife.

He asked Meyer to bring a shotgun with slugs along with him, just in case.

Meanwhile, Hoekstra looked for a blood trail.  He had a knee-high food plot of turnips up there, and  when he went to the place where he hit the bear he saw an area that had been he plowed through. But he could not find any blood.  “I kept thinking there is no way I missed him,” Hoekstra relays.

“So I went about five yards in the woods where he was behind that massive oak tree and I got down on my hands and knees, and I’m looking for blood. I couldn’t find a drop, and I thought no, no way,” he says.

“So I got up and was going to head down (to meet his wife and buddy) and I just happened to shine my light over and he was about 35 yards away, sitting there, looking at me, so I hit him again and he just tipped over,” Hoekstra says.

“Bear don’t necessarily bleed, you know, they are so fat, the fat in them kind of seals up, so you don’t really find a blood trail like you do for other animals,” explains Vickie.

The bear was approximately 175-200 lb and was 150 lb dressed.  They had burger, roasts and jerky made and Hoekstra says it tastes just like beef.

“This is a corn-fed bear from right around here… this is not something that had been eating pine needles,” explains Vickie.

“When we opened him up to gut him out, his gut was full of corn, and probably some beans. They say they do pretty good on acorns and I’ve got a big acorn patch up there,” states Hoekstra.

When asked if he knew how old the bear was, Hoekstra said, “It’s mandatory, you gotta send the teeth in, so I’m waiting” to hear back from them to find out how old it was, but, a friend who is a bear hunter thinks the bear was probably three to four years old.

The bear is now at the taxidermist, and they are hoping to have a bear rug for Christmas, but it was one big ball of burdocks and mud from rolling. The taxidermist will do his best to save the entire hide.  If not,  Hoekstra says he will be happy with a front mount.  “Hopefully it’s the only bear I ever have in that room,” he says half-joking.

When asked if he thinks there may be more bears in the area, Hoekstra says a neighbor kid, who lives straight across the valley “swears up and down that they had a bear and two cubs come through their yard – but there is no evidence,” states Hoekstra.  There have also been other stories of local people seeing bear in the area.

“Hopefully it’s just one,” states Hoekstra, but adds, “I got a feeling we are going to start seeing more bears.”

Since the bear has been gone, the number of deer Hoekstra is seeing on his trail cameras has skyrocketed.

The Hoekstras recently drove to Yellowstone for their 25th anniversary and Hoekstra says, “It was the first time I had seen a bear in the wild.” The second time was on their own property, and they hope it was the last time! 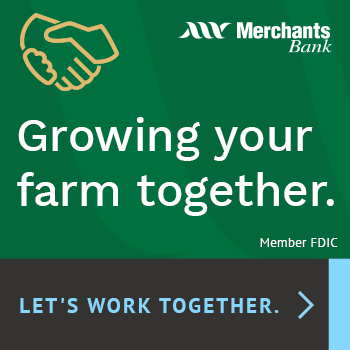