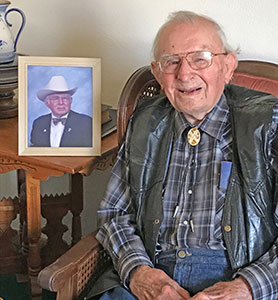 “So far this virus doesn’t hold a candle to the 1918 pandemic!” declared Bertram Boyum as we began our conversation about the two pandemics he has lived through. Boyum backed up his statement by explaining that 11,000 people died in Minnesota in 1918 from the pandemic. At that time the population of Minnesota was about ⅓ of today’s population.

102-year-old Bertram Boyum, reflected on the stories he’d heard as a youth about the 1918 pandemic. People talked about the pandemic for a long time. Some families were wiped out almost entirely, while in other families, the pandemic took just one.

Boyum related the story of a young mother who was very sick. The doctor had gone upstairs to her while the father waited downstairs. When the doctor came down again, he had to tell the man his wife had died. The doctor lamented in Norwegian, “Oh, God, why did you cut so deep?” The man was left to raise his children on his own with the youngest one not much more than a baby.

When asked if he felt the pandemic had affected his childhood, Boyum replied, “Not that I know of, but then it was all I knew. In those days we didn’t go out and about like we do today.”

Boyum went on to tell of his childhood, “In those days there were no snow plows, we did everything with a team and sleigh.” To get to town in the winter they drove the team and sleigh over the fields, avoiding the deeply rutted roads. The trip to town was only undertaken every couple weeks for supplies. Their farm was about five miles from the Fremont Creamery; cream was taken there weekly with the skim milk being fed to the pigs on the farm.

One of his favorite childhood memories was of Ginger, the pony he and his brother Chester owned. He chuckled, “She was kinda stubborn and mean, but we rode her. Both Chester and I cried when we sold her.”

Bertram shared a picture of himself as a ring bearer 97 years ago at a wedding at the Arendahl Lutheran Church, in 1923. He noted that the flower girl is 103 and still living in Minneapolis. Bertram showed the basket he carried for the wedding; he keeps it carefully tucked away in a cabinet in his home.

Bertram attended the one-room Grover School nearby. He reminisced, “The teacher would designate a couple boys to go to the neighbor for water. We all drank from the same dipper.” Apparently, the pandemic hadn’t affected how schools provided water to the students. Boyum shared that later they’d gotten a Red Wing water cooler, but that wasted water; they had to have a pail underneath to catch the waste water.

Boyum shared that the teacher always sent two boys out to raise the flag. Respect was always shown to the flag; it was not allowed to touch the ground. If a storm came up, the teacher would send the boys back out to retrieve the flag.

More of his school memories included the teacher letting them all go outside if they heard a plane fly over. Planes were novel at that time; they all wanted to see them. Boyum proudly shared that one of his classmates, James Davidson, went on to become famous in aviation. Davidson was the first pilot to take off and land a plane on a carrier for the U.S. If his flight had failed the whole U.S. fleet would have been in jeopardy. Davidson’s plane is at the Smithsonian, and he was the subject of a news series in the Argus, a Winona Historical publication.

Boyum’s Christmas memories were that each of the six children in his family received one present, usually a toy, which they treasured and took care of. They knew they had to make it last. Christmas was a time of visitation between family members. With his mother one of eleven and his dad one of eight, Boyum had 33 aunts and uncles and 54 first cousins. They would travel to each other’s homes and enjoy a noon meal with their relatives, often two or three times a week. This was their entertainment; there was no radio, tv, or organized sports.

Education was important to the Boyum family. Bertram enjoyed mathematics, “I have to say I’m pretty sharp with figures. I thank God everyday for my memory that’s holding up.”

In 1963 Boyum attended an auctioneering school in Mason City, Iowa. He went on to work as an auctioneer and real estate broker for 50 years. Since he enjoyed both jobs, he sold his farm and moved to a home in Rushford in 1967, where he still lives.

When asked his thoughts on today’s COVID pandemic, Boyum responded, “This thing is serious — I’m wondering if God is trying to tell us something. We gotta do what we can in order to keep going. I wear my mask whenever I’m out. I don’t go anywhere — there’s nothing to do. I keep in touch with people from senior dining by phone, but there’s nothing new — it’s kind of boring.”

Boyum still subscribes to the Winona and Rochester papers, reading them as well as the weeklies and magazines, to pass the time and spending up to half an hour to read a paper. He noted that the Fillmore County Journal is also a good paper.

Returning to the pandemic, Boyum  commented, “We’ve been lucky so far in Rushford as far as deaths, but we’ve had quite a few positive though. It’s kind of a mystery.”

As far as his own health goes, Boyum declared, “I’m in good health other than my weak legs.” Proof of that is on his Christmas card; he states that he is the “oldest active auctioneer in the nation.” He recently renewed his driver’s license and drove to his 102nd birthday party in Preston in September. When asked if he’d be getting the COVID vaccine, he logically replied that he’d have to talk to his doctor and see what he suggested.