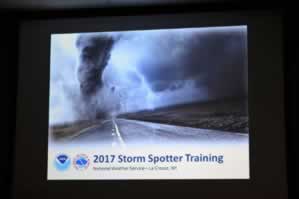 There is no better time to take storm spotter training than during Severe Weather Awareness Week on a rainy night with thunder booms and lightning flashes taking place outside.

Although Fillmore County was only under a slight risk of severe thunderstorms, it was a good reminder that we should always be aware of the weather conditions in and around our area.  Severe Weather Awareness week was held April 17-21, 2017 in Minnesota and Wisconsin and included two statewide tornado drills on Thursday, April 20, 2017.

Kevin Beck, Fillmore County Emergency Manager, introduced himself to begin the evening thanking all those attending for taking time out of their busy schedules to take the Storm Spotter Training.

Sheriff Tom Kaase then spoke and recognized Beck saying Storm Spotter training is just a part of the work that Beck does throughout Fillmore County. Kaase then thanked the crowd for attending saying it was “a nice size crowd” that came out on a rainy night.

“The awareness and the early warning” that storm spotters provide “helps saves lives and keep them safer,” stated Kaase.  “By you folks learning the things you are tonight and being able to recognize that and get that information to the appropriate sources can have a huge positive impact,” Kaase said.

Kaase next asked how many people in the room were signed up for “CodeRED,” with very few people raising their hands.  Kaase explained that CodeRED is “an alert system that is available to people and businesses throughout Fillmore County and it’s free of charge and you can get alerts to your cell phones, to your emails, to your home telephones of different emergency type alerts, including weather,” he said.

Beck explained how important CodeRED is, because if you are signed up for CodeRED “when the National Weather Service issues a warning typically it goes to all the tv stations and then gets broadcast out to all the radio stations – that actually will hit your phone or email just as fast as it hits theirs so you will probably be ahead of the ball game, because it takes just a little bit to get it across the tv and stuff,” stated Beck.

For more information on CodeRED, go to the Fillmore County website, www.co.fillmore.mn.us/code-red-notifications where there is a link to click on and “it’s very very easy to sign up for,” commented Kaase.

Shea began by introducing trainees to storm spotting, saying, “What we are asking you as spotter is to observe the weather that is occurring in your area,” and, “what is occurring with thunderstorms” and although the NWS wants spotters to be safe he noted, “we are asking people to go out in the weather though, so it is inherently a little more dangerous than just being hunkered down at home,” he said.

“This information is all used not only by local communities and local officials, but by the National Weather Service, too, to improve our warnings, to make them more timely and get a good feel for what is going on in the area,” Shea stated.

Shea says the mission of the NWS  is “to try protect life and property,” then joking, adds, “we can’t control the weather, although people think we do,” but says, “what we try to do is give people heads up when there is bad weather coming,” and spotters can play a part in that.

“Your report could make a difference in saving lives and lowering property damage” when severe weather threatens, Shea told the people in attendance.

“Realize when you see the warnings come across the television stations or on radio, or maybe it comes on your phone, that a lot of times that process is started from a spotter,” stated Shea.

The NWS provides services to their spotters, such as Hazardous Weather Outlooks, which are sent to the spotters via email and a Spotter Activation Notification System (SANS), which is used by the La Crosse NWS office to provide further guidance when spotters are needed.

The spotters were trained on where to place yourself to watch for storm and tornado development, how to report, what to report and how to report it.  Saying it is “very windy” does not help the NWS determine wind speed, so if the spotter does not have an anemometer to read wind speed there is an estimate sheet given which ranges from 25-31 mph (large branches in motion) up to greater than 75 mph (corn flat, tree uprooted and windows broke), which spotters can refer to.

Likewise, reporting “large hail” does not give the NWS an accurate size of hail stones, so spotters are asked to reference the size of a coin or game ball (other than “marble size” as marbles come in different sizes) when reporting the size of hail.

Shea explained the stages of thunderstorms, including updrafts (the upward moving air) and downdrafts (also called downbursts or microbursts) – the sudden gust of wind coming out of the storm.  Visually, when you see rain it will be in the downdraft area.

Thunderstorms hazards such as flooding, lightning and hail must be considered while storm spotters are out, as they can be very dangerous.

The attendees learned the different cloud types, such as shelf clouds, wall clouds, and others including scud clouds, which many people often mistakenly think are tornadoes as they hang down from the storm.

Shea explained the different thunderstorms, which include single cell, multicell cluster, or line (composed of multiple cells with each being at a different stage in the life cycle of a thunderstorm) and supercell (strongest and longest living type of storm), and also clarified squall lines, which are a line of thunderstorms forming along or ahead of a cold front.

The definition of a tornado is, “We have to have connection to the ground,” states Shea, adding, “you’re going to be looking for that violent rotation.”  “Minnesota averages 37 tornadoes per year and last year we had 37,” Shea noted. “June is our busiest severe weather month,” and after that the frequency tends to drop off.

Beck noted that storm spotter training is offered every other year in Fillmore County, so if you or anyone you know is interested in becoming a storm spotter, be sure to attend the next training session in 2019.

To customize your local weather forecast and to view other interesting information visit www.weather.gov/La Crosse.