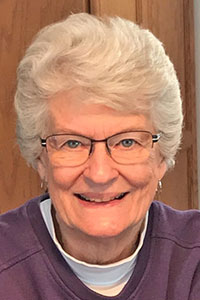 She grew up on the family farm in Rushford, Minn. She attended elementary school at Sandsness School, a country school that she and her sister walked to, unless the weather was bad. Then their dad would pick them up with his wagon or sleigh and horses. She attended high school at Rushford Public School graduating in 1947. After high school, she attended Luther College in Decorah, Iowa, graduating in 1951 with a B.A. in Social Science and Physical Education. She taught for three years at Chatfield, Minn., where she met Joe Fennie. Joe and Audrey were married on Audrey’s parents’ farm on January 23, 1955. They lived in Rochester until Joe decided to go back to teaching. He taught in Hayfield, then they moved to Arlington for three years, Starbuck for eight years and Benson for 20 years. Audrey taught school and worked in retail. In 1984 they moved to Northfield, Minn.

Audrey enjoyed traveling, making three trips to Norway, numerous trips to Alaska, Canada, both East and West Coasts and a cruise through the Panama Canal.

Audrey was preceded in death by her parents, her sister Eileen (Dahl) Arvesen and her husband Joseph Roger Fennie. She is survived by her daughter Kristi Hayes of Northfield, son Jon Fennie (Megan) of Port Angeles, Wash., granddaughter Kelly Ann Smerdon, of St. Louis Park, Minn.

We wish to thank the staff at Northfield Hospital and the Long Term Care facility for the wonderful care she received.

Due to COVID-19, services will be held at a later date and will be announced.  Audrey will be interred next to Joe in Oakwood Cemetery, Red Wing.

Memorials are preferred to St. Peter’s Lutheran Church or the donor’s choice.