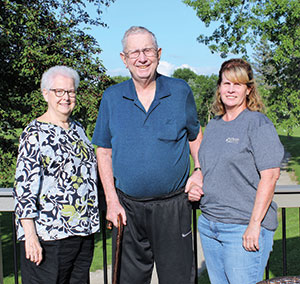 “You gotta like it, if you don’t like it, don’t do it,” states Freddy Frickson, who has been auctioneering at the Lanesboro Sales Commission for 64 years and loves to do the job just as much today as the day he started.

The Lanesboro Sales Commission held an Appreciation Dinner in honor of Frickson on July 12, 2021, at the Lanesboro Golf Course, with many friends and family in attendance.

Frickson has always known he wanted to be an auctioneer.  “From the time I could walk I wanted to be an auctioneer,” he says.  “My dad went to a lot of sales, back then there were a lot of sales, and I was a good student, so what I would do is I would pretend I was sick, so then I wouldn’t have to go to school on the day of those sales and I would go with my dad,” states Frickson.

“The auctioneer was here, and I was right next to him,” explains Frickson, as he watched every move the auctioneer made and picked up the knowledge to successfully sell just about anything.

Frickson got his official auctioneering education in Mason City in 1957.  “Of 133 students I was in the top 10,” he notes.

He began auctioneering for the Lanesboro Sales Commission later that year, along with other opportunities to sell a wide range of items, which means Frickson has been selling for 64 years… so far.

When asked why he likes being an auctioneer, Frickson responded, “I love it – it has always been fun for me – it was never work.”

“I love farm sales,” states Frickson, but he has taken other opportunities as they came.  “I have sold antiques and household goods,” he comments, but his favorite has always been farm sales.

“I sold a sale at a sales barn in Coon Valley, Wis., for 45 years at the same time as Lanesboro but on a different day of the week,” says Frickson.

Frickson was enjoying the evening at the Lanesboro Golf Course, sitting at a table with his wife Kathy, their daughter Brenda, and good friends Kenny and Irene Boldt.

After the delicious steak supper with all the fixins was consumed, and Frickson commented, “that was very good beef,” we began talking about how the business of auctioneering has changed over the years.

“Everything is modern now,” notes Frickson.  “Used to be we did everything with a pencil or your head and then along come the computers and of course, I can’t even turn the thing on,” he says with a chuckle.

“Sales are quite a lot bigger,” Frickson comments.  “Used to be you would have cattle and machinery at a farm sale, now the cattle go to the sales barns, the machinery goes to the dealer, and he has a consignment sale,” Frickson explains.

Frickson has also done a vast amount of auctioneering for charity and fundraisers, as he is asked often, and is happy to do it.  He has put in many hours over the years that have benefitted churches, schools and other organizations.

Frickson is appreciative of all of the people he has met through auctioneering and has worked with four generations of some families now.

During his free time, Frickson enjoys spending time with his family, possibly the only thing he enjoys more than auctioneering!