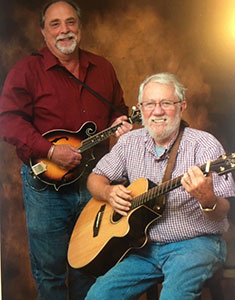 If you live locally and enjoy the excellent live music so often available here (before the pandemic squeezed us into strange boxes for the time being), you’ve probably heard of — and hopefully enjoyed — the classic country/bluegrass music of the Arnold-Bradley Band.

Family and friendship first connected Steve Arnold and Walter Bradley. “We’d known the Arnold family,” remembers Walter, “but when Steve’s son started dating our daughter, we’d all get together for holidays, backyard camp fires, that kind of thing. The kids broke up. Steve and I didn’t. We’ve been playing together as the Arnold-Bradley Band for about 15 years now.”

Both men have deep local roots. “I’m a native of Fountain and graduated from Preston High in 1963,” says Steve. “I was part-owner of the Fountain Feed Elevator for many years, then worked at Kuehn Motors out of Rochester. I live in the country three miles outside of Preston on land that our grandparents owned.”

Ask Walter Bradley if he’s lived his whole life in Lanesboro and he’ll tell you, “Not yet.” His family tree is also rooted deep in local soil. “I grew up on the hill right above Lanesboro, across from the Amdahl place, and graduated from the Lanesboro High School in 1973. Our family can visit the graves of our parents, grandparents, and great-grandparents in local cemeteries. During the big church fire in town in 1917, Great-Grampa Hanson helped carry the altar down the hill.” After high school and technical school graduation, Walter worked a number of local jobs, including at the Ford garage, and has been a financial associate with Lutheran Brotherhood (now Thrivent) for nearly 20 years. “I never had a hankerin’ to go out and tackle the world. Lanesboro is family, Lanesboro is home,” he says.

The two men also share a love for music that started early in both of their lives. Walter got his first guitar at age eight and has been playing ever since. “I took buck-and-a-half lessons from Mrs. Grindland in Peterson, and later with Mrs. Burmeister, who was everybody’s music teacher in Lanesboro for quite a while. I started playing with groups in the ‘80s and ‘90s, including The Better Than Nothing Band.”

“I love music,” Walter says. “It’s like blood pressure medicine for me. When I play I relax. A few years ago Steve and I had a gig in Chatfield. I had such a bad migraine that day I told Steve I’d help him set up but then I’d have to go lay down in the car and would have to miss the show. We started the sound-check, played a few songs. A half-hour later Steve asked me about my headache. What headache? It just disappeared.”

Music also came early for Steve Arnold. “I did some singing as a kid in school, later in college, and for occasional weddings,” he said. “I learned to play the guitar when I was in the Air Force and joined my first band in the early ‘80s called Keeping it Country. Later I joined the Pea Pickers and played with them for almost 20 years. We had a great time.”

Steve has his own “music as healing” story—a very personal and serious one. “In 1996 I had an accident at the Fountain elevator, falling 40 feet from the top of a bin. I broke my back, shoulder and a number of ribs and was unable to work for two years. I remember trying to pick at my guitar when I was in the hospital. Music was immensely helpful in my recovery.”

The Arnold-Bradley acoustic band (Steve Arnold on guitar, Walter Bradley on mandolin and guitar) regularly plays Lanesboro venues and other regional gigs. (“For a while we were playing four times a week; last year we did about 60 shows,” Walter says.) You’ll hear them at Karst Brewery in Fountain, Buffalo Bill Days events, Over the Back Fence at the St. Mane Theater, the Rhubarb Festival, Farmers Markets, church meetings, the nursing home circuit, not to mention at weddings, funerals, farm parties and in front of a few garage doors. They’ve even produced two CDs.

The annual Dan Chouinard Christmas Show is another favorite event. “We always have fun there,” Walter says. “A few years ago before the show Dan reminded us that one song we shouldn’t do is ‘Grandma Got Run Over by a Reindeer.’ After our first song, Steve looked at me with a wink and a grin, I shook my head ‘no,’ but here comes ‘Gramma.’ The people loved it. Dan said, ‘Okay, so much for elder abuse, let’s move on.’ Fun stuff.”

“I don’t read music,” Walter says, “A number of years ago, after playing in church, Mrs. Burmeister says to me, ‘You don’t read music, but you can feel it. That’s a blessing, too.’ It’s hard for musicians who read music to play with musicians who don’t. Steve and I work well together. We can hear a song a couple of times and pick it up by ear.” Steve agrees. “We’re a musical match made in heaven,” he says. “I like to play music the way I feel it, and Walter and I can just look at each other and know where we’re headed.”

What music do they most enjoy? “I like both kinds, both country and western,” Walter says with a laugh. Willie Nelson, Johnny Cash, Waylon Jennings, John Prine, and Merle Haggard, are favorites, says Steve. “All of them were excellent musicians who wrote great songs and who lived it. If you like classic country with an upbeat style, and a little bluegrass thrown in, we’re who you’re looking for.”

Bringing their music to assisted living and care centers has been a joy for both of them in recent ears. “Playing for older folks is special,” says Walter. “They’ll start singing along with songs and hymns they remember.” Sadly, more than 30 of those shows have been cancelled this summer because of the pandemic.

There’s one “dream gig” that Walter longs for.

“We own some property down in Tennessee, about 25 minutes from Dollywood. You see lots of log homes down there. It seems all of them have a front porch with a couple of guys rocking, picking and singing. I’d like to be one of those guys on one of those porches, wearing bib overalls, sitting and chewing and playing for Miss Dolly.”

The Arnold-Bradley Band is available for local gigs (as current restrictions allow). On Sunday, August 8, 2020, they’ll play at Karst Brewery in Fountain from 4-6 p.m. For booking information call (507) 259-4012. “We play for a little bit of money but have a whole lot of fun,” Steve says. “This has been one fun ride.”