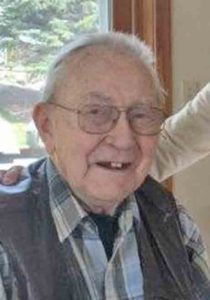 Arland Odell Brown, 88, of Mabel, Minn., formerly of Coon Rapids, Minn., peacefully passed away on Sunday, May 29, 2022, at the Green Lea Senior Living facility in Mabel.

Arland was born on June 23, 1933, to Ada Elvira Knudsen and Arthur Palmer Brown at what is now the Sanford Tracy Medical Center in Tracy, Minn. They resided at and ran the Knudsen family farm South of Revere, Minn., where Arland attended country grade school and Lamberton Middle School. In 1946 they moved to Mabel, Minnesota and ran the Brown home farm for many years. Arland attended Mabel High School and graduated as a member of the 1951 class. After graduation, Arland went to Winona Business School. Upon completion, he worked on various local farms and ended up working for Fairway Foods in Northfield, Minn., as a truck driver and mechanic until his retirement in 1987. He also spent two years in the Army as a Military Police Officer, stationed in Fort Monroe, Va., from 1955-1957. He was also a retired Teamster and former member of the Rifle Legion Drill Team.

On August 20, 1967, he married Darla Mae Frautnick at St. James First Lutheran Church in St. James, Minn. They settled in Coon Rapids, Minn., and adopted a baby girl from Seoul, South Korea that they named Michelle (Shelly). Darla died on October 25, 1989, and Arland married the second love of his life, Ellen Bidne Brown (née Ellen Marian Anderson) on June 23, 2001. They were fortunate enough to enjoy over 20 years of happiness and laughter together before her passing on January 3, 2022.

Arland enjoyed his many trips to the boat casino with Ellen, socializing with family and friends, playing cards and pull tabs, and trying to catch the “big one” on his fishing excursions when he still had his boat. He also enjoyed eating as much lefse and lutefisk as possible, especially around the holidays.

He was preceded in death by his parents Ada and Arthur, his first wife Darla, and his second wife Ellen.

The visitation will be from 11 a.m. – 12 p.m. Thursday, June 2 at the Mengis Funeral Home in Mabel, with the funeral service immediately following. A memorial and luncheon will be hosted by the Mabel American Legion after the service. The burial will be at Mount Hope Cemetery in St. James, Minn.

The Mengis Funeral Home in Mabel is assisting with arrangements.