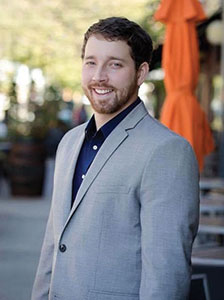 “Zeb was my best friend.  Zeb was everyone’s best friend, or at least it seemed that way,” states Ben Vondal.  So when Zebulin “Zeb” Hermanson was lost to suicide in 2018, his heartbroken friends knew they had to find a way to keep his memory alive but they also wanted to find a way to help those who may be struggling as Zeb was.

“Adam Cole and I got together and decided we needed to put together some sort of annual event to remember and honor our great friend,” notes Vondal.  “We knew it would be a big hit because Zeb had more friends than anyone we’ve ever known and he had touched the lives of so many,” he adds.

“A golf tournament was an easy choice because it is something Zeb loved and something we often did together.  Getting all his people together for golf, drinks and an awesome time would have made him happy,” Vondal explains.

“Amanda Curry came in and helped us bring our idea to fruition;  helping us to get sponsors, marketing the event and helping to keep things organized and running smoothly in the weeks leading up to, and especially on, the day of the event — her husband Chad helps out a lot as well,” states Vondal.

In 2019, the First Annual Zeb’s Memorial Classic took place with an overwhelming response from individuals, groups and businesses.

The tournament, which  will be held Saturday, August 1, 2020, at the Chosen Valley Country Club,  fills up fast so the organizers have to cut it off at 22 teams for a total of 88 golfers.  As it is only a nine-hole course golfers go around the course twice to play 18 holes.

It is a four-person team, best-shot scramble format.  There will fun games and prizes throughout the day that the organizers have set up that they feel add to the fun and would be very much “Zeb approved,” such as when golfers get to hole five everyone must tee off by hitting their ball with a baseball bat, and other clever ideas which will bring smiles and laughter to all participants.

There will be prizes for longest drive, longest putt, closest to the pin, etc., on many holes also, so let the competition for a great cause begin. Some of the money raised from the golf tournament each year is donated to suicide prevention.

“Last year we made two separate donations from the proceeds.  One was something Zeb would have wanted and that was an investment savings account being set up for his two brothers, Scout and Sawyer, who he cared so much about.  The other was a $1,000 donation in Zeb’s name to the American Foundation for Suicide Prevention,” explains Vondal.

“His family and friends have had two good showings at the Out of the Darkness community walks in Rochester the last two years, and hopefully that will continue for years to come.  It is a great way to remember Zeb and help raise awareness about suicide and suicide prevention,” Vondal adds.

“The remainder of the proceeds went to getting this year’s event off the ground (renting the course for the day, renting extra carts to be shipped in and picked up after, and the raffle prizes that will be given away,” he explains.

“We hope to raise even more money this year and donate more and more each year to great causes.  We will continue to donate to suicide prevention causes each year while also keeping Zeb’s Memorial Classic going for many, many years to come.  This year we plan to try to find a local family who may be dealing with the unfortunate reality of having a loved one taken away from them by suicide and who could use some extra love and assistance,” says Vondal.

“Zeb was such a special person and had so many people that cared about him that we needed something like this to highlight all of that.  We remember and honor him while doing what he loved with the people he loved,” Vondal states.

When asked to describe Zeb, Vondal replied, “I have never met anyone who knew as many people and cared about as many people as he did.  He was literally a social butterfly.  Even while being a bit of a wild card, you knew he’d always be there for you if you needed him.  He gave out so much love to everyone he came across, and always had a smile on his face.  He loved having a good time and being around friends and his family.  He love watching sports.  He loved playing golf.  He loved making people smile and knowing they were happy,” Vondal commented.

“All of the things I listed describing him were truly who he was.  That is what makes it so hard to understand and why depression, anxiety, and especially suicide are so hard to understand.  Zeb gave out so much love but still couldn’t always love himself.  You don’t always see what people are going through on the inside.  There are usually some clues and warning signs though and what I’ve learned more than anything is to always check on your friends and family and don’t be afraid to ask hard questions if you have a feeling something may be a little off or they seem a little down.  You never know who you are going to help,” he states.

Vondal wishes to thank Adam Cole, Amanda and Chad Curry, and his wife Marnie for all of the help with last year’s event and for the work he knows they will put in again this year, as well as all of the volunteers that help with the event.

“Thank you to all of the golfers who come have a fun time while celebrating Zeb.  Thank you to Zeb’s mom, Kim Richardson.  Also a big thank you to Chosen Valley Country Club for letting us host the event at the course,” expresses Vondal.

Plan ahead and mark your calendars for August 1 so as to not miss this heartfelt, charitable and entertaining memorial golf tournament — you never know what a difference you could make.