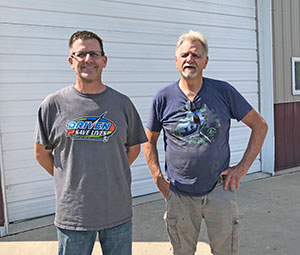 As of September 1, 2021, Whalan’s number one auto body shop, Doc’s Auto Body and Repair, will have a new name: Whalan Auto Body, LLC. New owner Jon VanMinsel will officially take over the shop from former owner Dale Peterson. Peterson owned the shop for almost 19 years; VanMinsel worked for Peterson for over 11 of those years.

The transition had been in the works for several years. When COVID hit last year, they were just about to make the deal, but Peterson was hesitant to sell to VanMinsel during the uncertain economic times.

Peterson, who lives near Preston, looks forward to doing some biking, working in his shop, and just walking his dog. He shared his full confidence in VanMinsel’s ability, saying, “He’s as good as anybody I’ve ever seen at what he does. He’s a good painter and has good body skills; he’s an excellent mechanic!”

Jon VanMinsel currently lives in Harmony. When he first graduated high school, he and his brothers did masonry work; his brothers stayed with masonry while Jon chose a different route. He had his own body shop in Spring Valley, then he worked in Rochester, and then in Spring Grove doing body work.

Since VanMinsel came to Doc’s, he has done most of the air conditioning and windshield work, this was work Dale Peterson used to hire out. Jon has done body work on cars from “start to finish” all of his life.

When asked what he likes about Whalan and specifically the auto body shop, Jon answered that it was quiet with friendly people who weren’t rude. He went on, “I like the atmosphere; it’s nonconfrontational here and I like that.”

He added that the shop was a comfortable place to work. Air conditioning had been added five years ago so, according to Jon, “It’s warm in the winter and cool in the summer.”

In Jon’s spare time, he enjoys dirt track racing; he raced cars for 25 years and still enjoys going to the races in Fountain City, Wis. Although he sold all his cars three years ago, he still helps his friend Shaun Walski with his. The body shop, racing, and his five-year-old grandson Oliver keep Jon busy.

VanMinsel wants the public to know that he’s still going to sell tires, do brakes, wheel bearings, AC servicing, oil changes, and routine mechanic work at the shop just as Doc’s has in the past.

He will continue to use top of the line materials and paints in his body shop. PPG Envirobase paint, which VanMinsel calls “as good as it gets” for color match and durability will be featured.

Dale Peterson was quick to point out that their body shop was one of the first locally to start using water-based paints. He related that within a month of their starting to use it, there were six body shops in the tri-state area jumping on the bandwagon. The result with the water-based paint was an enhanced finished product, and Jon has the most experience in using it of anyone around.

As the duo posed for a picture, Peterson commented, “We’ve laughed a lot and hopefully the laughter continues! The shop is in very good hands.”

VanMinsel, who turns 50 on August 29, closes on his shop August 31, and takes over the shop officially September 1, claims life doesn’t really start until you’re 50! He’s ready to get on with his life as the new owner of the shop.

When I asked Jon why I hadn’t heard more about him and the shop before, he quickly quipped, “Maybe you weren’t listening!”

Listen up folks, it sounds like Whalan Auto Body, LLC will be a great place to take your car! You can contact the business by calling the shop at (507) 467-3598 or emailing whalanautobody@gmail.com