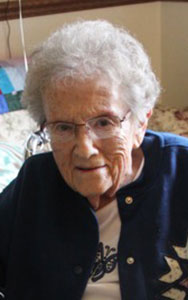 Angie was born October 10, 1927, in Mount Carroll, Ill., to Howard and Beulah (Kness) Imel.  She grew up in the Mount Carroll area, graduating from high school there in 1946.  She moved to Cedar Rapids, Iowa, where she worked at Woolworths.  It was there where she met Earl Wernet.  They were married on April 12, 1948, at the Decorah Lutheran Church.

They moved back to Earl’s family farm near Bluffton, Iowa, (Cold Water).  She did factory work in Freeport, Ill., from 1953 to 1970.  They then moved to Prosper, Minn., operating the Crystal Inn in Burr Oak and purchasing the Prosper School.  They originally turned it into an antique shop and later into the Stateline Supper Club.  She had also worked at the elementary school in Canton and the Canton Mini Mart.  After retiring, Earl and Angie moved to Brownsville.  She enjoyed spending time with family, socializing, dancing, playing cards, gambling, and spending time at their boathouse fishing, boating, and just being on the river.  Earl passed away August 13, 2012.

A private family burial will be held in the Bluffton Cemetery.   The Mengis Funeral Home in Mabel is assisting with arrangements.