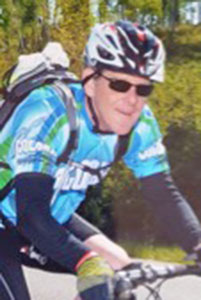 Andrew (Andy) Hogue of Golden, Colo., passed away on December 28, 2020, at age 70, after a long battle with dementia. Andy was born in Harmony, Minn., on April 30, 1950, to Harry and Phyllis Hogue.  After high school, he served in both the Navy and Air Force branches of the military. He then attended Winona State University, obtaining a bachelor’s degree in business administration. He married Terri Sue Wannemuehler of Holmen, Wis., on June 11, 1983. They pursued many adventures and career opportunities during their marriage, including living in Minnesota, Wisconsin, Arizona, California and Colorado. Andy worked in a range of industries and management positions throughout his career, finally retiring from Alaska Airlines in 2015. He loved sports and spent many years coaching his son through t-ball and Little League, and playing softball with friends and family. He enjoyed the outdoors and was an avid cyclist and fly fisherman. Andy’s last great adventure was participating in “Ride the Rockies” – a strenuous bike tour through the Rocky Mountains of Colorado.

He was preceded in death by his parents, Harry and Phyllis.

Services will be held at a future date. In lieu of flowers, please consider making a donation in Andy’s name to the Alzheimer’s Association (www.alz.org).