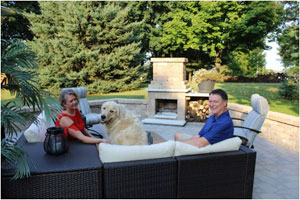 Have you ever visited a place on vacation that felt just right – inviting, comfortable, peaceful? And did you wish you could find a way to pack that place up in your suitcase and take it home with you? Well, that’s what Scott and Sharone Rustad of Fountain did. On a visit to Scott’s aunt in Texas, they discovered  both the hotels and the homes there had stone patios that served as open but intimate outdoor gathering spots. The Texas stone masonry, in a soft sand color, was beautiful. Scott and Sharone felt a strong draw to these patios and the germ of an idea travelled home with them.

The house the Rustads live in is both the same and different from the one Scott grew up in. His parents, Donna and Duane Rustad bought the land in 1962 and built the original house just past the church in Fountain off Highway 52. At that time it was an open field with a sinkhole across the driveway. Scott remembers, as a boy, he could shoot his BB gun in the yard without worrying about the neighbors. The elder Rustads built their home and planted trees that now tower majestically, shading the spacious lawn. Scott moved away for 15 years, then, in 1998 he and Sharone moved back to Fountain and began to make the original homestead their own.

In 2005 they tackled the interior. Kevin Eickhoff, of Eickhoff Building and Remodeling, worked with them on the design and he and his son did the remodeling work. “Many walls came down,” says Sharone. “Houses used to have separate little rooms. Now they are more open.” Working with Scott and Sharone, Eickhoff not only remodeled the interior, adding square footage and opening up the space, but also adding a garage and creating a welcoming entrance off a covered deck. For about eight years after their time in Texas, the Rustads dreamed about what they would do to create the kind of outdoor space that they found so compelling. Then last year, Scott said, “Let’s do it now.” Their son, Sam, currently in his first year of college at the University of Wisconsin, River Falls, was graduating in the spring of 2017 and they envisioned having his party in that outdoor space. There would also be plenty of time for their daughter, Sierra, a junior at Fillmore Central, to enjoy it. Schroder, the mellow golden retriever, makes himself right at home on the new patio, too.

Part of the challenge in getting stone work done was to find someone who could do it. “We’re pretty busy,” Scott says, “and while there are people who can do this work themselves, that’s not us. We do know lots of people with skills, but it would have taken them quite a bit of time.” The Rustads heard that The Treehouse Landscape and Garden Center might be an option. “There was a patio at a house near Good Earth Village that Todd from The Treehouse had done. It looked like quality work,” Sharone notes. “When Todd came out to see us, he brought books of design options with him and he asked good questions. When we learned that he and his crew could get the whole thing done in four or five days it was hard to believe.” Scott adds, “They came when they said. They finished when they said. It was a good crew. Each person had his own specialty and they worked well together. They were good about doing the extra things like moving dirt around and the worksite was cleaned up when they were done.”

When you start a project like this, it’s good to be prepared, Sharone and Scott advise. “Have a vision,” says Sharone. “Have a budget,” says Scott, “but also, this is not a place to skimp. It was important to do what we’ll enjoy. We’ll probably have it for the rest of our lives.” The way this patio is designed, with straight lines, will make it easy to change things or add on in the future. The couple already has a few ideas percolating in their minds for “Someday” – a wood fired pizza oven or a bar and grill area with a canopy would be among the many desirable options.

Sharone recalls that it was cold in November 2016, when The Treehouse crew completed the new patio, but the outdoor fireplace faces the living room. “We’d light a fire outside then enjoy it from the warmth and comfort of the house,” she says. “It was especially beautiful when it was snowing outside.”

In April they got furniture. Cushioned and comfortable, it can be reconfigured as desired. Sometimes Scott and Sharone line up the seating in a row and set up a big screen projection TV outside to watch movies. Other times they create a small gathering space for close friends. Still other times the space can be opened up and the low, seat-high stone wall can comfortably accommodate a crowd. Then there are those rare times in summer when nothing calls them away from home, night falls, the Big Dipper appears, and Scott and Sharone sit quietly together enjoying the peace under the stars.

The inviting welcome of the patio almost makes them forget the work it took to get to this point. “The hardest part was the preparation,” Sharone confides. A kind neighbor helped them move the shed. It also took a lot of work to remove the existing landscaping – edging, plants, and stones.  “Be prepared for things to be muddy and dirty,” Scott shares. There was a lot of follow-up finish work around the patio that they did themselves. The Rustads planted trees and shrubs, thinking ahead to a time when these new additions will be able to add to a sense of intimacy and replace the giant trees around them as needed. Young trees that will offer privacy and flowers in the future have to be planted on faith that they will grow and serve that function in time.

“Summer is so short in Minnesota,” says Sharone, “and although we’re busy, we spend as much time outdoors as possible. The patio draws us outside.” The Rustads enjoy entertaining and memories of summer parties or just “having people over” come easily, accompanied by smiles. They extend the season using the fireplace, a patio heater and, sometimes, a portable fire pit. Scott finds his peace after work on the patio listening to his music, the louder the better. Sharone likes the patio at night best. The light of the fire, a candle, soft lights that flank the stone wall, all call to her with a vision of calm.

The Treehouse Landscape and Garden Center, (507) 561-3785, is a full service nursery and landscape operation that also provides custom design and specializes in patios, retaining walls, stone fireplaces, water features, foundation plantings and just about anything to beautify your landscape. They are located one mile north of the Iowa border on Highway 63, where examples of various designs can be seen and experienced.

Kevin Eickhoff Building and Remodeling, (507) 273-3858, is based in Fountain and provides custom design service. There isn’t much they can’t do, from two-hour installations to two-year whole house remodels.  They also source most of their supplies locally through Fountain Building Center.