I looked for toad feathers.

The unexpected is expected in 2020, so this might be the year to find toad feathers. The year has provided a bag of mental pretzels.

Some folks wish 2020 would hurry to an end. I’m not one who wants to grease the skids for its getaway as I don’t want to wish away a minute of my life. As a boy, I wished for Saturdays. My mother warned me not to wish my life away. Other people say things like, “If 2020 were ice cream, it’d be asparagus-flavored.” That might be OK. I enjoy asparagus. I look around me and am thankful for many things including an indoor bathroom. I didn’t ripen with one.

I grew up in a house without an indoor toilet. We had an outhouse. My father claimed indoor toilets were nothing more than a passing fad that would never catch on. “What if their house burned down, then where would they go?” he’d say.

We were in the kitchen because that’s where the food was. Dad was reading Capper’s Weekly as I studied a comic book when my mother burst in. She told us there was something in the outhouse and someone needed to get it out. Then she left in a huff. Dad drove a Pontiac and Mom apparently drove a huff. 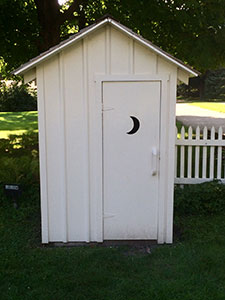 Dad checked on the intruder, determined it was a skunk and made an executive decision to delegate the dispatching whatever was in the outhouse duties to me, as he had a pressing engagement. I’d have preferred a jovial suggestion that I was just the man for the job. That way, I could have modestly declined. I protested that the job was above my pay grade, but that fell on deaf ears. I tackled the job because I didn’t want to be deemed untrustworthy.

I had no idea how to get a skunk out of an outhouse. That hadn’t been covered in the fifth grade. I knew it wasn’t rocket surgery — that’s a cross between rocket science and brain surgery. I walked to the outhouse door and heard noises coming from within. I sang a song from “Damn Yankees,” a hit Broadway musical and movie about a desperate fan who made a bargain with the devil so the Washington Senators baseball team could beat the New York Yankees and win the pennant. “You can open any door, there’s nothing to it but to do it. You’ve gotta have heart. Miles and miles and miles of heart.” I added my miles of heart to the subtle tactics employed by Matt Dillon of Gunsmoke and slammed a shoulder into the door in a way that would have made the marshal proud. I saw nothing inside. I took a peek into one of the holes. We had a three-holer because we were rich. Something looked back at me. The skunk! I put a rough-hewn board down into a hole to act as a ladder for the skunk’s escape. I sat on a convenient stump nearby and waited. It took a long while, but the skunk found its way out. Mission accomplished. My parents could hand-deliver my genius award. The skunk walked near me and sprayed to let me know it was thinking of me.

About a year later, my mother burst into the kitchen with a similar report, demanding someone free the little house of whatever had possessed it. She left in another huff. My father skedaddled. I didn’t know he could still skedaddle. You win together, lose alone. It made sense I’d get the job. I had experience. I was the go-to guy. I found the board that proved somewhat helpful a year earlier and walked to the outhouse. Years later, I read Nicholson Baker’s brilliant novel “The Mezzanine” about a man who left an office building during his lunch hour to buy shoelaces. It wasn’t an intricate plot. Tension occurred when the man got onto an escalator and forgot what was in the shopping bag he held. This caused him to reflect on his life. That’s what I’d been doing. The outhouse was that shopping bag but I hadn’t forgotten what was in it. I’d never known. I heard sounds inside the privy. I used Matt Dillon’s technique once again. The door opened and I saw nothing. I was about to check the holes for skunks when a bluebird flew out.

I learned there is a bluebird of happiness.