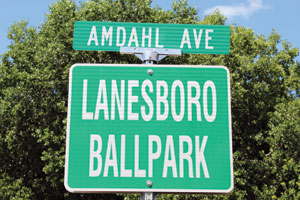 A very touching dedication ceremony took place in Lanesboro, Minn., on Saturday, August 3, 2019, as the City of Lanesboro dedicated the road leading to the softball field as Amdahl Avenue, in posthumous recognition of Orval and Marie Amdahl, who were cornerstones of the community for many years. The softball field was recently spruced up by a group of residents and the school ball games once again are played on this field, which hasn’t happened in years.

Orval and Marie were married in Washington, D.C. on July 4, 1942, and they lived in Fredericksburg, Va., until Orval received his assignment papers, after which she moved to Minneapolis, working as a bookkeeper for a gas company until the war ended.

After the war the couple returned to the Lanesboro and Preston area.  Orval became the manager of the Farmers & Merchants Lumber Yard until he was elected as Fillmore County Recorder.  He served the county in that position for 40 years.

Marie was an “exceptional” mother according to her family, as well as an excellent cook and a skilled seamstress.

Marie was honored for 70 years of membership in the American Legion, and was a volunteer with the Red Cross and March of Dimes. She was an active member of the Sons of Norway and was also a 4-H leader and Girl Scout leader, and involved in other activities.

Orval played first base on the Lanesboro baseball team for 10 years and was involved in ball field improvements years later.  He and Marie both enjoyed attending sporting events in the area, including many days and evenings spent at the Lanesboro Ball Field.

Orval passed away in February 2015 and Marie followed in November 2017, leaving an absence in the hearts of their family and community.

Many of Orval and Marie’s family members were able to attend the dedication and it was a very special occasion for each of them.

“It’s a great honor for my parents,” stated their son Ron, who added, “They have been super supporters of Lanesboro and all of Fillmore County and they would be very honored.”

“They would be proud,” commented Britt Amdahl, grandson of the couple.

Among many others present for the naming of the avenue were Mayor Jason Resseman, Council member Autumn Johnson and City Administrator Michele Peterson.

Jim Haugen with the Lanesboro Park Board and the Lanesboro American Legion spoke eloquently about the couple, saying no one is more deserving to have the avenue named after them. He also shared a few memories and thoughts about his longtime friend Orval, who he got to know through the American Legion.

Haugen notes, “He was very active in the Legion club, was instrumental in developing and setting up the county Legion board and he served on the board for years… He helped establish one of the most successful Legion clubs in the area and it still is to this day, and I think we have that attitude of service that he instilled in us all those years he was a member.

“His sense of service was incredible — he served all his life — in the military, at the county level and at the local level. His service to the community was unbelievable — he did a lot for this community.”

The Park Board started the initiative to dedicate the avenue and made a recommendation to the council, with the council approving their recommendation.  “Orval and Marie are missed, however, now we will have a constant reminder of them as part of the history of Lanesboro,” states Peterson.

“I’ve never known anybody who had a street named after them so it’s pretty amazing to have your parents be the first one,” commented Ron Amdahl.

“I think it’s very appropriate to recognize this particular avenue as Amdahl Avenue,” stated Haugen, and it was also fitting that there was a softball game taking place while the dedication occurred.  It just so happens that Orval and Marie’s longtime home sits high on top of Lanesboro’s north bluff and overlooks the ball field, and now, Amdahl Avenue.

“They’re here,” stated several family members.  No doubt that Orval and Marie felt the love, and enjoyed the game.