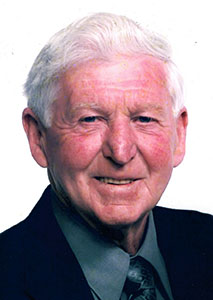 Alvin was born October 30, 1932, near Burr Oak, Iowa, to Kenneth and Pearl (Harvey) Darling.  In 1950 he graduated from the Mabel High School. From 1953 to 1955 Alvin served in the United States Army and was stationed in Greenland. On April 3, 1956, he married LaVonne McCauley at St. Bridget Catholic Church in Bluffton.  They lived in Beloit, Wis., for a short time before moving back to the Burr Oak area in 1958.  He farmed, worked in maintenance at Luther College, and later was a truck driver for Featherlite in Cresco.  They lived in Burr Oak until January 2017, when they became residents at Wellington Place in Decorah. LaVonne passed away on February 21, 2017.

He was preceded in death by his parents Kenneth and Pearl Darling, a son, Danny Darling; father- and mother-in-law Elmer and Gladys McCauley, daughter-in-law Shirley Darling, two grandsons, Troy Kruse and Dustin Downing; and brother and sister-in-law Lester and Jean McCauley.

Graveside service with military honors will be 11 a.m. Saturday, November 21 in the Burr Oak Cemetery. The Mengis Funeral home in Mabel, Minn., is assisting with arrangements. www.mengisfuneralhome.com.