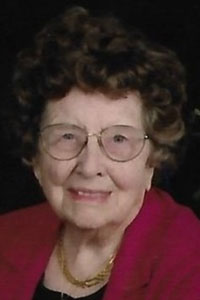 At the age of 106, Alta Borgen Reese died peacefully on July 29 at Edenbrook Care Center in Rochester, Minn.

After attending Paulson school, a rural common school near the family farm, Alta boarded in Lanesboro, Minn., and graduated from Lanesboro High School in 1930.  She furthered her education in Winona, Minn., graduating from Winona State Teacher’s College in 1932.  She began her teaching career back at the Paulson common school then went on to teach at Newburg, Motley, Morgan, Chatfield and Lake Benton, Minn.  Teaching kindergarten and elementary students was such a joy for her.

She married Orville A. Reese on September 16, 1941.  They lived in several cities while raising four sons and eventually settled in Chatfield, Minn., in 1958  when Orville was employed as a boilermaker at the fledgling IBM company in Rochester, Minn.  After Orville’s death in 1978, Alta divided her time between Chatfield and Apache Junction, Ariz., until her move to Edenbrook (Maple Manor) Care Center in Rochester at the age of 100.

In 1976 she retired from her position as an employee of the State of MN Hearing and Vision testing program.  She was in charge of organizing, supervising and completing tests for SE Mn schools.  She excelled in this position and it was one of her proudest accomplishments.

Throughout her lifetime Alta was an active and vibrant woman who embraced life and enjoyed learning, facing new challenges and activities of all kinds. She especially enjoyed music of many genres, playing organ and participating in choirs, both in Chatfield and Apache Junction.

Alta was at her best when hosting her family or her wide circle of friends.  She excelled at making people feel welcomed and cared for.  She will be remembered for her giggle, her smile and sincere caring for the people around her.

The family would like to especially thank Alta’s caregivers both while she was still at home in Chatfield – the Good Samaritan Society of Preston, Minn., Meals on Wheels program and volunteers; and in Rochester – Edenbrook Care Center. A very special thank you to her neighbors in Chatfield: Marge, Gordon and Edna for their watchful eyes and helping hands.  Funeral service will be 12 p.m. Tuesday, August 6, 2019, at Chatfield United Methodist Church, with Pastor Debra Jene Collum officiating. Visitation will be one hour before services at the church. Burial will take place at Chatfield Cemetery, following the services.