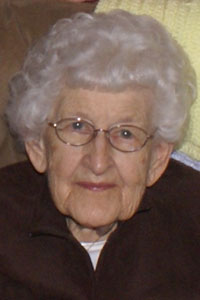 Funeral services will be held at 11 a.m. Friday, May 10, 2019, at Burr Oak United Methodist Church in Burr Oak, Iowa, with Karen Carlton officiating. Burial will be in Burr Oak Cemetery.

Visitation will be from 4-7 p.m. Thursday, May 9 at Fjelstul Funeral Home in Decorah and on Friday beginning at 10 a.m., one hour before the service at Burr Oak United Methodist Church.

Alice Lorraine (Albertson) Wilbur was born on April 12, 1920, the eleventh of 12 children, to Henry O. and Ella Theresa (Espeseth) Albertson at home on their farm in Lincoln Township, Winneshiek County, Iowa.  She was baptized at the Lincoln Lutheran Church near Ridgeway, Iowa. Her grade school education was in Winneshiek and Howard Counties. At age 13 she went to live with her oldest brother Ole and his wife Gladys, which enabled her to attend high school. She was active in 4-H and joined Burr Oak United Methodist Church in 1938. She graduated from Burr Oak High School in 1937. Luther College became coeducational in 1936 by admitting women. She entered Luther in 1937, in the second class of admitted students that included enrolled women. Alice graduated from Luther’s two year Elementary Education course in 1939. She then taught school for three years.

Alice was united in marriage to Lyle Everette Wilbur on September 6, 1941, at Burr Oak United Methodist Church. They were blessed with five children: Curtis, Cleon, Karen, Wanda and Mark.

Lyle and Alice farmed in the Prosper, Minn., area for many years, until 1978, when they retired and moved into Decorah. She kept busy with her children, farm work, 4-H, church and Sunday School. After their retirement, she did volunteer work at Aase Haugen Homes, Oneota Riverview Care Facility, and at the Senior Citizens Center, stitching quilts.