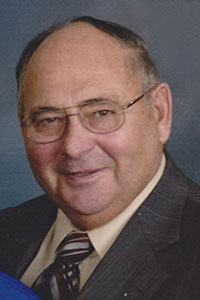 He was born on June 3, 1937, to Albert and Adeline (Fimon) Lange.  They moved from Racine to their current homestead in 1941. Larry was the oldest of four children.  His parents were charter members of First English Lutheran Church where Larry was a lifetime member, and where he served on the council and as an elder.  Larry was baptized on July 11, 1937 at his home.  He was a farmer all his life with a great love for the land, animals, his family, country, and God.  He worked in his later years for Howard Farms, Marzolf Implement, and Vogt Farms, until retiring in September of 2019.  He was also in the Army National Guard from 1956 until being honorably discharged in 1961. In 1958, Larry met the love of his life, Emily Ristau, on a blind date. They were married on August 8 of that year and to this union, five children were born: Larry Dale, Wayne, Jane, Lori, and Troy. During his spare time, Larry enjoyed spending time with his wife and family, traveling, visiting with friends, or just working on the farm.  He also enjoyed attending his grandchildren’s sporting events, tractor shows, and restoring antique tractors and machinery, especially Minneapolis-Molines. He will be deeply missed by all who knew him.

The family would like to thank the staff of Seasons Hospice for the wonderful care and comfort they provided, also Hindt Funeral Home, and Pastor Loel Wessel.

Funeral services for Larry will be held at 10:30 a.m. on Thursday, October 15, 2020, at First English Lutheran Church in Spring Valley, Minn., with Pastor Lowell Wessel officiating. Family and close friends are welcome to attend. Visitation will be held from 4-7 p.m. on Wednesday, October 14, 2020, at Hindt Funeral Home in Spring Valley. Social distancing will be practiced and masks will be required for the safety of the family.