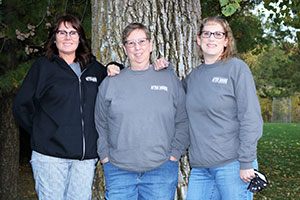 “I was able to see immediately somebody standing there and I could identify him by his name, his rank and his appearance – and we got very intelligent responses,” states Dr. Hawk Horvath of After Hours Paranormal Investigations, about the investigation her team did at the Chatfield VFW in Chatfield, Minn. the evening of Saturday, October 3, 2020.

“They approached and asked if we would be willing to go in,” to the VFW for an investigation, states Horvath.  “It was a great time,” she adds.

“Now we are going through all our data analysis, looking for evidence with the hope of bringing that back to the powers that be at the American Legion.   We can’t do something big now with COVID, but, to be able to go in and share with them what we caught – and then maybe there will come a time when things ease up a little with COVID and it settles down and we will be able to do something bigger to share,” states Horvath.

Horvath and Owegi live in Rochester, Minn., and Cousineau lives in Chatfield.  All three have professional, full-time jobs aside from their work with AHPI.

AHPI falls under the umbrella of Horvath’s business, Horvath Spiritual Consulting of Rochester, Minn., in which she offers psychic, medium, spiritual consulting and mentor services.

When asked how they got involved in ghost hunting and if they have always been interested they each gave their own personal stories. 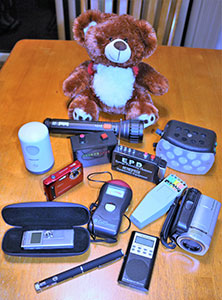 “I am a psychic and a medium, and I have been seeing things since I was a child.  I was sitting one night watching tv, was bored and I had a trip coming up out to western Pennsylvania where my family is. I was raised out there, and they are all pretty much gone now.  I was not looking forward to the trip and thinking of something fun I could do while I was there,” explains Horvath.

She was channel surfing and came across a show called Ghost Hunters.  They were at a place called the Mansfield Reformatory, also known as the Ohio State Prison.  The fellow who was leading the tour was Frank Horvath, who is not related to her, but she thought it was pretty cool they shared the same last name.

“I watched this whole hour show, and I was so taken in by it, and the fact that they were looking for evidence – not all this big hoopla and drama –  they wanted solid evidence.  They investigated, then would do data analysis and then they would go back and do a reveal of whatever evidence they caught,” she noted.

Horvath checked to see how far the Ohio State Prison, in Mansfield, Ohio, was from where she was traveling in Pennsylvania.  After finding out that it was only a two-hour drive, she took a shot in the dark, called the prison and someone answered.

Horvath asked if they ever let anyone come in and see the prison.  The response she got was rather surprising to her as the person on the phone replied “we actually turn a hundred people loose in here overnight for an investigation once a month” which peaked Horvath’s curiosity even further, so when she was then told that they were letting people in on the day she would be in the area, with only one open spot remaining, Horvath jumped at the opportunity.

“So, that was my first investigation. At that time, that location was on the top 10 list of haunted places in the country … I didn’t have a clue what I was doing,” states Horvath.  She teamed up with a partner for that investigation.  They were the first ones in the gate that night and the last ones out the next morning.

Horvath came back to Rochester and started a team called the Rochester Investigators of the Paranormal.  That team was more interested in investigating smaller, quaint places than larger locations that Horvath was seeking, so in 2010 Horvath started After Hours Paranormal Investigations.

“I’ve always been interested,” states Kari.  “The first experience I had was in fifth grade.  My grandpa died, and that night he came to me in my room.  He didn’t talk to me, he was just there.  I closed my eyes and he was gone,” she explains.

She didn’t tell anybody about that experience at the time and didn’t until she started working with AHPI.  “My sister and I shared a room and I didn’t want her freaking out,” says Cousineau.

About seven years ago she was looking for something to do with her mom when she came to visit in October.  They found the Rochester Haunted Trolley Tours, where Horvath is one of the tour guides, so she made sure to go when Horvath was working.  “Why would you go on a haunted tour without the psychic/medium?” states Cousineau.

During the exciting trolley tour, Cousineau learned that Horvath gives classes.  “If you do the 101 and the 201, then you can do the 301, which is an investigation,” she explains. “I was just amazed that real-life people were doing this stuff  – it wasn’t just people on TV, we had people around who actually go and do the ghost hunts and get to do this. I signed up for every class I could,” she states.

Cousineau has now worked her way up to Senior Investigator at AHPI, after five years of paranormal investigations.

“We were impressed with Kari… Some of the ghost hunting shows are so dramatic, but we liked Kari – she was solid and didn’t get into the dramatic,” notes Horvath. 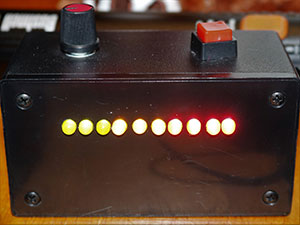 As she got older she wanted to know more.  She saw an ad in the paper that adult education was offering ghost hunting classes and she knew she had to go.  After completing the Ghost Hunting 101 class, she also did the 201 and the 301 classes and “here I am now,” she says, after joining the AHPI team a few weeks ago.

After 13 years of experience, Horvath has been around the country investigating top 10 haunted places.  She has been to Ireland twice, investigating possibly the most haunted castle in the world. “Leap is believed to be the most haunted castle in Ireland, Europe and possibly the world. I’ve had the privilege of investigating it’s notorious “Bloody Chapel” twice!  It is full of activity!  We caught video of two green eyes watching us at Leap Castle in 2012,” she states.

If you have never had paranormal activity in your home or business and suddenly unexplainable things start happening, Horvath can come and do a house reading for you.

We get calls from people saying, “I have things going on in my house and I’m not sure what to do, “states Horvath, so she offers a house reading.

“If I go into a house and do a reading and think there is enough going on in there to warrant an investigation and the people are open to it, then I will bring the team in.  But that means that the people, their pets and their children all have to leave for the night and turn it over to us and we will investigate,” she explains,

“Much of the time, not all of the time, people want kind of a ghost exterminator – just get it out – and I don’t do that,” she states.  “I tell them what’s in their house and if they need to be concerned or not, and if it looks like something needs to go I do have a contact that operates in kind of that realm,” says Horvath.  Although, she believes “they are gonna go when they are good and ready to go.”

“My first question when somebody calls me is, “are you doing any construction on your house or your place of business?” She explains that “construction will really stir things up” and create activity.

If there is no construction going on, Horvath’s second question is “What have you brought new into your house?” They often times say “nothing new,” so then she rephrases the question as, “Ok, what have you brought old into your house – like from Savers, Goodwill, Salvation Army, a garage sale, an antique store, etc., because residual energy can attach to an object – it’s not a ghost, but it’s energy that’s leftover.”

“My suggestion was that they put it out in the garage, and everything calmed down in the house. I don’t know what they did with the piece of furniture after that. They probably took it to Goodwill or Salvation Army!” states Horvath.

Land also holds energy.  Horvath explains a time when dirt was brought in to a building site that was taken from an old race track that had been shut down due to so many deaths, and activity started at the site due to the dirt being moved.

People feel better once the team explains what is going on in their house or business. “It’s the fear of the unknown – you can’t see them, you can’t hear them, so you don’t know,” explains Cousineau.

Some of the local places that the team has investigated include:

The Opera House in Mantorville, Minn., which Horvath has investigated over 30 times, and describes as a good place to take students, because there is always activity and it is safe.

Stewartville City Hall, about two years ago “we had the key to city hall for awhile – it was a blast,” states Horvath.  “We found a lot there too,” she adds.

AHPI brings a whole host of equipment with them when ghost hunting.  Some of this equipment includes voice recorders, a rem rod, vibration readers, camcorders with infrared, a ghost box, a K-2 meter, a proximity detector, infrared cameras, laser lights, motion lights, a dead light and “Boo Bear” who is a cute piece of equipment.

Boo Bear looks like an ordinary teddy bear.  “He is good in a situation where we set him up in a room that we are not in. Especially somewhere that there are kids, or reported to be kids. It will detect temperature changes; he listens, he detects any electromagnetic difference and he will say something. He will talk every 45 seconds, ask a question, and try to get somebody to talk,” explains Cousineau.

Other “equipment” they bring along depends on where they are going.  It could be children’s books and toys, or it could be military items like the ones they brought to the Chatfield VFW, including army pictures, the Boots & Badges book published by the Fillmore County Journal, Cousineau’s color guard uniform, among other items.

“That’s one thing, with research, we find out where we are, what it’s been in the past,” states Cousineau, noting that the Chatfield VFW was a blacksmith shop at one time, so bringing horseshoes, etc. could be a trigger there also.

“We get a lot more calls in October because unfortunately, everybody thinks that ghosts only come out at Halloween,” states Horvath.  “So this is our busy season,” she adds.

Their investigations can get physical at times, as Horvath has been pushed and hit once.  A member of her former team was slapped across the face, and both Horvath and Cousineau have been scratched, although they do not feel it was intentional.

To find out more information, see photos and recordings, including from the Chatfield VFW, visit the After Hours Paranormal Investigations Facebook page, or visit afterhoursinvestigations.net.