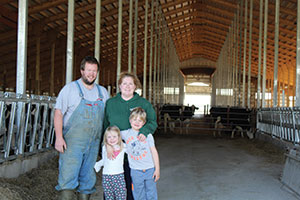 “It was the first time in 116 years we weren’t milking a cow,” Corey Hoffman of North-Creek Dairy said. After the blizzard in late February 2019, Corey, a fourth generation farmer, and his family thought they were going to have to shut down their dairy farm near Chatfield for good. “I was heartbroken,” he said.

It started at about 1 a.m. on February 24. An 80’x100’ section of the Hoffman dairy barn collapsed under the weight of the snow. Thankfully, no one was in the barn at the time. The family moved the cows out of the collapsed area and cleaned up as best they could. Friends, fellow dairy farmers, and neighbors wanted to come and help right away, but the highways were shut down and abandoned cars sat on Highway 30 going past the Hoffman dairy farm. Instead, about 30 people planned to come at 9 a.m. on Tuesday, February 26 after the snow on the roads was cleared enough to get through. At approximately 5:45 a.m. that morning, the clean-up plans were abruptly changed when another section of the roof collapsed. This time, there were people inside working, including Corey and his dad Gary. “Dad and I had just gone through that spot five minutes earlier,” Corey said. “As soon as that second collapse happened, we knew we just had to get the cows out of there.” He was glad that the collapse happened when it did because if it had been just a few hours later, more people would’ve been in the barn helping to clean it up and could have been injured.

Between the first and second collapses, the Hoffmans lost about 15 cows. A decision had to be made to protect the remaining herd and fast. Corey’s wife Bridget made a post on Facebook explaining that the entire herd needed to be rehoused or sold that day. Over 1,200 people shared her post and soon a friend of Corey’s from Lake City called with an offer to buy the adult cows. “He paid more than a fair amount for them without even looking at them,” Corey said. “That took a lot of trust on his part.” The Hoffmans’ heifers were moved to another farm for the time being.

As soon as the cows had been sold, people started arriving with trucks and trailers to help move them. Within five short hours, the herd was gone. It was a good thing because sections of the barn, built in 2007, continued to collapse until only 60 feet were left standing out of the original 290. A 120-foot addition, built in 2015 by a different construction company was also standing. The Hoffmans later found out that, thanks to the lack of a building code for ag buildings in Minnesota, the 2007 barn had a very poor snow load rating, which is what led to its collapse. The 2015 section had over double the rating and stood firm.

Over the next few days and weeks, the Hoffmans received cards, letters, and phone calls offering support and sympathy. Many were from complete strangers. It seemed that the Hoffmans’ plight had struck a chord with numerous people. “Our barn collapsing was a symbol of the dairy industry collapsing over the last five years,” Corey explained, adding that his family has felt the strain as well, losing money every one of those five years. That combined with the collapse seemed like too much to recover from. “We thought maybe we were done dairy farming forever,” Corey said.

The collapse of their barn not only affected the Hoffman family and their employees, but also the whole community. “Something like that has a huge ripple effect,” Corey explained. When he sat down to figure out how many other businesses and companies were affected by the closing of his dairy farm, the total came to 83.

But then the insurance check arrived at the end of May and things changed again. It was enough to rebuild, and thanks to the Hoffmans’ new-found knowledge of snow load ratings, they were ready. They hired KBS Ag Construction, the same company that had built their sturdy addition in 2015, and on October 18, the new barn was completed. Corey, his family, and their employees were ready to start milking before the barn was even finished. He purchased a herd of about 340 cows and started milking 300 of them on October 8.

Corey and his family knows that they couldn’t have done it alone though and are grateful for all of the support and encouragement they received. “The support from the ag community really helped us get through everything,” he said. “We’re really optimistic about our future now.”