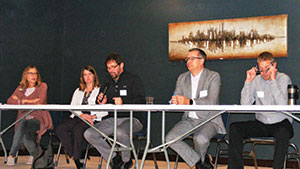 Several speakers and panels provided information pertaining to the relationship between adequate affordable housing and the attraction and maintenance of an adequate workforce. Many communities in the area have a shortage of affordable housing. Presenters pointed to resources and expertise that can be of help to communities to deal with this issue.

Sheila Kiscaden, Olmsted County commissioner, and Natalie Siderius, DEED, are co-chairs of SE MN Together. Kiscaden introduced speakers and the panels that addressed housing from every angle from data/demand, to developers/builders, state and local funders, technical planning/planning assistance, and a number of related topics.

Minnesota Housing Governor’s Task Force 2018 concluded “economic growth depends on adequate affordable housing for workers.” Home construction in Minnesota has not been keeping up with demand. Affordable housing programs must be funded. Low income homeowners, especially seniors, need to make repairs/maintenance to stay in their homes. The cost required for new construction is more than what is considered affordable by many people. Multi-family housing construction is needed, but it is a challenge to build at a cost that will allow for an affordable rent. Regulation requirements add to costs. One goal from the task force is the construction of 300,000 homes of all types and price ranges across the state by 2030.

All sectors of our economy depend on an adequate supply of affordable housing. Over the last 20 years housing costs have outpaced real wages in Minnesota by a large percent. Housing construction has not yet recovered since the Great Recession.

Warren Hanson, CEO Greater Minnesota Housing Fund, maintained housing is in a crisis and affordable housing is not a partisan issue. We need to work together to lower costs, innovate with new building technology and regulatory improvements, and obtain additional resources through government, philanthropy, and the private sector. He stated, “Additional housing is essential to attracting and retaining workers.” Join the effort, www.frontdoorcampaign.org.

Angela Davis recounted her life story. She serves on the Olmsted County Housing and Redevelopment Authority (HRA) board representing residents receiving some support for housing. Having lived through the process, she described her challenges and the hoops she had to jump through. Davis said she had to deal with preconceived notions as to the value and worth of people who live in public housing.

Builder/developer Mike Paradise, Bigelow Homes, noted that the lot price is basic to the house price. There is a need for a diverse housing stock, different needs at different costs. Slab homes are popular with baby boomers/empty nesters. Better partnerships are necessary to provide affordable homes. Builders have to make a profit to stay in business.

Cathy Enerson, CEDA Eyota and Preston, recounted Preston’s livability project. The median income in Preston is $48,500. A housing needs assessment has been completed. There is a need to increase the number of rental units by 30%. Ten potential housing developments with willing sellers have been identified. Thirty percent of the city’s housing stock needs to be replaced. The goal is to increase the population to 1,400 by 2030. Videos have been produced marketing Preston as a place to live and work.

Nick Larson, community development Winona (population 27,000), noted that 64.5% of the city’s workforce commutes to Winona. There is an effort to rehabilitate existing housing, recruit developers, and educate the community about the housing shortage. The city is way under the need of “for sale” family units and it is working to produce rental units.

Representatives from Three Rivers Community Action, Inc. and Southwest Minnesota Housing Partnership (both non-profits) detailed recent multi-unit projects they have completed or are working on.

John Rocker, lending director Greater Minnesota Housing Fund (GMHF), explained that this is a statewide organization that will invest $70 million this year in affordable housing. Funds are used to preserve existing housing, to produce new affordable housing, to support sustainable home ownership, and to prevent homelessness. Representatives from other funding entities also presented including  Minnesota Housing and USDA Rural Development.

Randal Hemmerlin, Red Wing Housing and Redevelopment Authority, described the slow growth the city has experienced in recent years (additional eight people per year). The city of over 16,000 has many major employers and smaller manufacturing companies. Six thousand commute into the city each day for work. Hemmerlin believes this is directly related to the availability of housing in the city. A small fraction of recommended housing units are being built. They are slowly coming out of what he referred to as the 2008 housing “debacle,” or the Great Recession.

Preston, Winona, and Red Wing all have a similar issue: a large percentage of their workforce commutes into their city, but lives elsewhere.

The last panel reviewed available technical and planning assistance. The GMHF can help frame projects and connect you to the right resources. The Minnesota Housing Partnership has a policy and advocacy function for community development and the preservation of existing stock. Three Rivers Action, Inc. looks at community development, the feasibility of a project, and helps bring partners involved in a project together. Chad Adams, CEO Southwest Minnesota Housing Partnership, explained they provide feasibility reports, grant writing, housing plans, and community planning and technical assistance. They also help provide services for small communities with gaps in services.

Natalie Siderius said we need good data, referencing the 2020 census and census count trainings. Sheila Kiscaden insisted every county should have a “complete count” committee. It is hard to count children under five, millennials, and new arrivals. We need to count everybody. Every undercount will represent the loss of $2,500 of federal money that could come into the state. In the 2010 census, Minnesota almost lost a congressional seat; the difference was only 2,000 people. The census count will affect the amount of funding that will come into the state in future years.