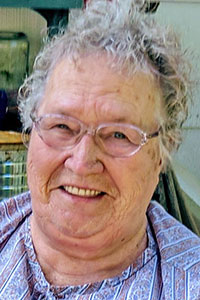 Adelia Noreen Marquardt, 92, passed away quietly on the night of Saturday, March 20, 2021, from complications following a stroke in the Chosen Valley Care Center.

She was born Adelia Noreen Dunford at 9:30 on the Friday morning of January 11, 1929, to Floyd and Gertrude (Adams) Dunford. The second of seven children, she was raised in the Rochester area. In 1948 she met the love of her life, Marvin Henry Marquardt, and they married on June 20 in Rochester, Minn. Throughout their young adult life, Adelia gave birth to six beautiful children. They raised their family in the Southeastern Minnesota area as Marvin worked as a farmhand and Adelia was a stay-at-home mother.

Adelia was a cultivator of life – taking pride in growing beautiful gardens, caring for animals, and caring for her children, grandchildren, and great grandchildren. She enjoyed sewing, crocheting, cooking, and baking. Adelia loved reading the newspaper and listening to polka music. She spent the last six years of her life living in a home on the farm of her eldest daughter and son-in-law, Rebecca and Donald Hodkinson, where she was able to continue her beloved hobbies and remain close to family.

She is survived by her sisters, Bessie (Herb) Zimmer and Virginia (Daniel) Winter; as well as her brother, Walter Dunford. She leaves behind her six children: Rebecca (Donald) Fogarty Hodkinson, Jean Schroeder, Trudy Marquardt, Cynthia (Jay) Musolf, Sharon (Glen) Rasmussen, and Joseph (Louise) Marquardt. She has nine surviving grandchildren and many great-grandchildren.