Without shame, I admit that I have never made a pumpkin pie from scratch.  Maybe you haven’t either?  Now, before you get testy and mad at me please let me explain.  I have never purchased a frozen pie crust.  My “never fail pie crust recipe” lives up to its name.  My husband says it is even better than his mother’s.  Please don’t pout, Myna, everything else you make is better than mine.

Perhaps you have made a from-scratch crust and used canned pumpkin rather than baking a pie pumpkin, cleaning out the innards  and seeds and then pureeing the flesh.  See, we are already on the same side because that’s what I do too.  Usually I buy Libby’s canned pumpkin because it has the recipe on the back of the can. Libby’s canned pumpkin hit the market in the 1920s.  In the 1950s when the pie recipe was printed on the  back of the can, it became a bonafide Thanksgiving star.  Libby’s is still the biggest name in canned pumpkin.  It produces 85% of the canned pumpkin in America, or enough to make 90 million pies every year.  So why have the majority of us never  made a real homemade pumpkin  pie?  Because the Libby’s can contains  a strain of Dickinson squash, which is thicker and creamier than the flesh inside a pie pumpkin.  We have been duped into making squash pie.  Now before you decide to sue, keep reading.  The FDA has okayed the use of the term pumpkin.  So blame them.  In 2019 the company added another pie recipe on the back of the can, made with sweetened condensed milk so the baker could choose between the two. 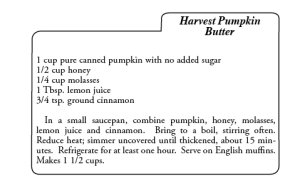 There have been actual pumpkin shortages.  For instance, poor harvests in Illinois caused canned pumpkin pie filling shortages and produced a minor panic in 2009.  Now because of the pandemic we are accustomed to shortages.  Please don’t rush out and buy all the canned pumpkin on your grocer’s shelves.  Let everybody have a can or two.  Be a good citizen.

Pumpkin is good for you.  It is heart healthy.  The potassium in this vegetable may help lower blood pressure and protect against strokes.  It supports eye health because it contains vitamin A, which helps with dry eyes and eye diseases.  Even better, pumpkin contains nutrients that promote healthy skin.  Choose canned pumpkin wisely.  Pumpkin pie filling contains sugar and spices which eventually end up in baked goods and is different from mashed, cooked pure pumpkin which has about 50 calories and 3 grams of fiber per cup.

I apologize if I got your hopes up about a pumpkin pie diet.  Still, I will be eating pumpkin pie with real whipped cream, and I will be thankful!

Another way to get pure pumpkin into your diet is to make pumpkin butter.