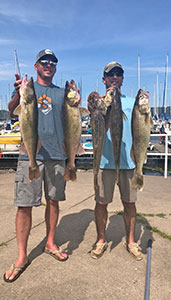 American author Zane Grey once wrote, “If I fished only to capture fish, my fishing trips would have ended long ago.” This philosophy eloquently describes the unseen rewards of fishing, and Brent Afseth is one fisherman who finds joy in more than just the catch. Brent’s earliest memories of fishing include going with his dad to Mille Lacs lake and staying at McQuoid’s resort. Brent recalls the feelings he had before he went on that first fishing trip. “The first trip I remember with dad I think I was five years old, and I remember how excited I was, because he went on a lot of fishing trips when I was little that I couldn’t go on, but then when I finally got to go it was pretty awesome, it was just he and I for the weekend.”

Brent’s love of fishing continued to grow as he grew up in the country. Living about six miles west of Harmony, Brent had a lot of friends that lived nearby and they would fish together often. “We would meet up and go fish the local streams and catch trout and creek trout almost every day of summer when we could go,” he recalled. When he got a little older, he began doing walleye tournaments, and he began traveling all over the state and even North and South Dakota for the tournaments. Before having kids he would do 12-15 tournaments a year. The thrill of competition is one of the intrinsic rewards Brent enjoys about fishing. “I love competition, but that’s only part of it. I love the competition of fishing tournaments and how it forces you to be a better fisherman. You have to go out when it’s windy and rainy and cold, when you’d normally say, ‘I’m going to stay on shore today.’” Another benefit about fishing is the people he has met along the way. “Fishing and hunting in general has brought me a lot of friends that I wouldn’t necessarily have met any other way, and they’re lifelong friends. They have the same passion for the outdoors and that, to me, is really rewarding to find friends that are interested in the same things you are.”

At home Brent makes a lot of his own fishing jigs and sinkers, but when he needs other equipment his go-to place is River Valley Outfitters in Wabasha. “They have really good bait and an awesome selection of hunting and fishing stuff. I like to go there because it’s a local business. Instead of going online where I could get it a little cheaper, I like to support the local businesses because they typically have better products anyway.” He also likes to go to Kurt’s in Preston to get nightcrawlers and waxworms in the winter time. Another thing he enjoys about fishing is that you’re never done learning about it. “It’s an ever evolving sport and there are plenty of resources online to learn more about it. One website I spend a lot of time looking at and learning from is “In Depth Outdoors.” That was started as a fishing guide in Red Wing, and it’s a massive website now. There’s limitless information for fishing in this area, and it’s a pretty good community of people on there that are always willing to help.”

Brent and his wife Brenda have two kids, Marissa, age 13, and Cole, age 5. Brent and Brenda have taught their kids how to fish, and Brent summed it up this way, “Basically, if I’m not fishing a tournament, then Brenda and the kids come with me.” Two summers ago the Afseth family did a fishing tournament together in Wabasha over Father’s Day weekend. “We all fished and we did pretty well. We caught our limit of walleyes and had a really fun day. You know at the time, for a 12-year-old and a 4-year-old to spend eight hours in the boat fishing is a pretty good testament to their love of fishing, I would say! And

Cole and Marissa were attentive to fishing all day.” Brent reflects on how fishing teaches his children and himself patience. “When I’m fishing with Bryce, my tournament partner, or someone well versed in fishing, it’s just easy. All you have to take care of is yourself. When I’m bringing the kids I’ve got to help them with their rods and reels, and putting bait on for them, taking fish off for them, and fixing snags and things like that. It also teaches them patience because they have to wait, and intently wait, for a bite.” Fishing provides a hobby that they can do together as a family, and teaches them lifelong values. “I think fishing also gives them a great appreciation for the outdoors, and I think that should be a focus for all kids. Getting outside and spending time doing things with family is very important, and it’s definitely a huge part of our family.”

Recently Brent’s son Cole fished in a youth ice fishing tournament in Lake City and he ended up winning the 10 and Under division. “He won the largest perch and the largest fish of the tournament, so that was pretty exciting for him.” When asked if Cole would continue doing fishing tournaments, Brent laughed and said, “I have no doubt that Bryce, my current tournament partner, will probably lose a seat in the boat some day. He’s got a young son as well, so I would imagine that at some point we’ll probably be competing against each other with our kids.” This year Brent will be competing in the Officer Schneider Memorial tournament in Lake City, the Grumpy Old Men tournament in Wabasha, and the Ralph Dierks tournament in Red Wing. Brent also pointed out that fishing is fun for any age and any skill level. “One thing that’s cool about fishing is that you can be on one end of the spectrum, where your summer revolves around fishing, or you can buy a can of worms and sit on the shore along the Root River in Preston, catching trout and relaxing. You don’t have to be an expert to catch fish, and that’s important to call out.” With so many reasons for fishing to be rewarding, it’s likely the greatest catch won’t be the fish.