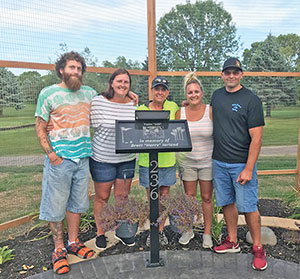 Teri and Brett Jarland shared a love of golf, and of spending time with friends and family.  In fact, when they were married in 2003, their wedding reception was held at Harmony Golf Course, and they included a golf outing in their festivities.

Brett was diagnosed with cancer, and eventually received services from Mayo Hospice, which Teri said was “wonderful.”  When Brett passed away in January of this year, at the age of 54, the family decided to do something special as a memorial to Brett.  The Jarland home is located just a block or two from the Harmony Golf Course, which is no mere coincidence.  Brett was an avid golfer who, along with his family, spent lots of time on the course and at the clubhouse.

After Brett’s death, Teri and her kids discussed the patio area at the course.  The original portion of the patio was built years ago via donations from club members.  For years, the Jarland family had enjoyed relaxing on the patio, but there had always been a dream of adding onto it.  As Teri explained, “We’ve always sat on that patio there, and always discussed phase two.  My husband wanted to do phase two, and that’s where this all came about.”

After consulting with the managers of the course, the plans were made to create the “phase two” portion of the patio, with 100% of the funds coming from memorial funds to honor Brett’s memory.  Teri stated that before the project began, “The area was just grass.  We built the whole new fence, we did the landscaping.  Some of the plants came from my garden.”  The patio includes ample tables and seating, a firepit, protective fencing, decorative perennial plants, and there are plans to add an indoor/outdoor TV at some point. 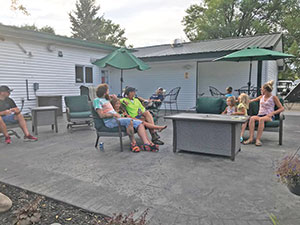 Much of the work was done on the new patio area by family and friends.  When asked about sharing the names, Teri explained that those who helped had done so simply to take part in a meaningful way, and they didn’t do it for any recognition or to “get credit” for their efforts.  Teri stated, “It was a lot of community members, friends and family, a lot of golf members, and even some young kids had come up to help pour cement, that knew him, but didn’t know him… they just wanted to be part of the project.”  Besides “elbow grease” the family appreciated that some of the materials for the patio were also donated, and again with no credit needed.

The work on the patio began in early June, with plans to have it completed for several summer events.  Because of the pandemic, some of the usual events had to be canceled, but nevertheless, the patio was completed quickly, proving the adage that “many hands make light work.”

Teri added that there is still some memorial money left, which the family intends to use to put on a memorial golf tournament in Brett’s name.  The tournament was scheduled to happen in August, but because of the pandemic, this too was canceled and put off until 2021.  Teri explained that Brett’s favorite number was 236 (based on his birthday of February 3, 1965) so the “Jarland Jackpot” tournament will be held on or close to the 236th day of the year, and will start with a tee-time of 2:36 p.m.  The first hole-in-one will win $236.  A memorial plaque on the new patio features the number 236 prominently, along with a photo of Brett on his golf cart.

Teri and Brett’s children (Taylor, Jordan, Billie, and Kristi), as well as grandchildren, showed pride in enjoying the beautiful patio area.  Teri added that one side benefit from all of her time working on the patio is, “I learned the skill of how to run a Bobcat, along with a sander.”  And it’s clear that for the family, and the community, the patio will be enjoyed by many for years to come.