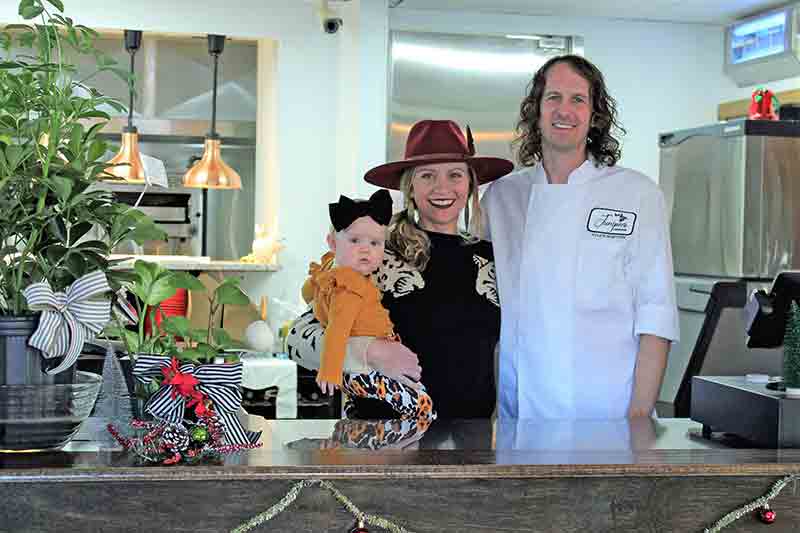 Already a joyful person, Tyler Shipton has several reasons to be grateful this holiday season.  The most important being his fiancé Ame Putman and their 11-month-old daughter Juniper. And, the very exciting aspect of being the executive chef and owner of his own restaurant, Juniper’s, in beautiful downtown Lanesboro.

Named after Juniper, Shipton is bringing his love for his family and his passion for cooking together in an almost dreamlike setting with a view of the Root River.

Shipton’s interest in all things food began while growing up on a hobby farm in southeast Minnesota, often times cooking, canning and pickling his grandmother’s fresh garden produce alongside her.

In 2009 he graduated with honors from the Art Institutes International Minnesota with a Bachelor of Science in Culinary Management.  After time spent working in various kitchens, his professional career began in earnest when he was hired at Porter and Frye at Hotel Ivy under the seven time James Beard nominated chef, Steven Brown.

In  early 2010, Shipton was offered a position at Bar Lagrassa, under another James Beard Award winning chef, Isaac Becker. Toward the end of 2010, Shipton added to his cooking knowledge by moving on to Travail Kitchen and Amusements, where he was surrounded by classically trained chefs in an all -scratch kitchen.

“After two years in this environment, it was time to embark on my own journey and I teamed up with another classically trained chef, Nick O’Leary, and opened our first restaurant, Borough, in Minneapolis,” says Shipton.

“After a successful first year, we opened up another restaurant, Coup d’ etat.  Utilizing the same development strategies with a completely different food concept, in a 9,000 sq. ft. space, with a new theme of a walkup, late night window with street food,” notes Shipton.

“In 2015, I was wanting more out of the food scene and took a chance to see what the west coast had in store. With an eager mind and extreme motivation, I ended up in San Diego, Calif.,  one of the top states and cities in the food scene.  There I landed an executive chef position with one of the most successful restaurant groups in San Diego, The Cohn Group.  I started with Bo Beau Kitchen and Garden,”   recalls Shipton.

“Over the next four and a half years with Bo Beau, I updated and changed he menu with the seasons, catered to large parties and developed food and beverage pairings for small events, holidays and groups.  I transitioned into the executive chef position at The Joint, where I got to learn more about Japanese cuisine, as well as working with wild game and some of the best produce southern California can offer,” he notes.

When the pandemic hit and shut things down, Shipton and his fiancé were forced back to the farm on which he grew up. “The house where my dad lives is where my great-grandpa and my grandma were born. Now my baby, Juniper, got to spend the first part of her life in this farmhouse as well.  Our roots run pretty deep in the area,” states Shipton.

“Over the past 15 years I have undergone some extremely extensive training. leading to a diverse background in the professional food scene and some symbolic achievements,” expresses Shipton.

After moving back to southern Minnesota, Shipton considered different options, such as a food truck, but decided brick and mortar was the way to go for what he wanted to create.

“I never in a million years thought I would be back working or owning a business in Lanesboro. But after coming back, it’s been almost 20 years, and seeing what this community has done, it’s incredible. You don’t see very many towns like this across the country that are 750 people, and thousands of people come down here in the summertime,” remarks Shipton.

Although area residents will quickly recognize the new color scheme on the outside of the building and a few changes inside such as light fixtures, new paint, tables, speaker system, etc. the majority of the upgrades took place where they were needed the most.

“Most of it to me was the backbone, the function of the restaurant.  Cold beer, coolers, a kitchen line that can produce and keep up with the volume that is going to happen here in the summertime.  So I mostly remodeled the kitchen –  took out a bunch of walls and got all new equipment.  That was the most focused point of the building,” explains Shipton.

“I am very thankful for my family for all the weekends they have spent here with me to help me with this project,” adds Shipton. A soft opening was held at Juniper’s on November 28 and the grand opening took place on December 2.  Both went very well.

Shipton describes his menu as “elevated comfort food,” which is easy to understand when perusing the menu he has created at Juniper’s. “Growing up here, I know it’s very ‘meat and potato and comfort food,’ so I wanted to hit all that stuff, but yet add a little more world touch to it,” notes Shipton.

Wanting the locals to like Juniper’s,  Shipton offers domestic beer, basic cheeseburgers, and other comfort food, but also serves items other than sandwiches, fried chicken, mac ‘n cheese and pizza since those are already offerd in the area.  He wants to use his background and knowledge to offer even more variety.

“The poutine has been really popular with locals – I just did my version of it. I have braised short ribs with a red wine jus and instead of putting shredded cheese on it and melting it, I am doing a shallot white wine reduction sauce, and use aged cheddar to make the cheese sauce and that goes on top of it.  Just a little bit something different, but it’s still like that poutine,” he explains.

The menu at Juniper’s is full of ingenuity and impressive ingredients – from Chicken Karaage to Pork Bolognese and Ravioli to Crème Brule.  The fresh pasta at Juniper’s is shipped down from Aliment Pasta Co. in Minneapolis, and is an added reward to your palate.  See the complete menu on facebook.com/Junipersrestaurant. Shipton is serving a lot of pasta, fish and veggie bowls.

“Lanesboro was the best small town in the area for me because of the open mindedness when it comes to trying to new things in food. Nobody was as ‘open arms’ to me as Lanesboro was when I was looking at property and trying to get something going.” said Shipton. “I am ready to bring a new flare of food and ambiance to the town of Lanesboro and the surrounding communities.”

Business has been impressive since Juniper’s opened its doors. “I’m super appreciative at the amount of locals that have come in.  Especially the first day we opened, it was nearly all Lanesboro people.  We have been getting people from all over the area lately.  I can’t complain,” he says. “It’s been amazing, the local businesses and the community has been so supportive.”

Juniper’s will be open year-round, which is a plus in the area.  “Living in the area, any amenity, and anything we can have around here is a huge plus. There is such a drive for food down here, at night especially,”   states Shipton.

Shipton has a staff of approximately 12, who are eager to welcome customers to the new business. “We have a great staff.  I couldn’t ask for a better kitchen staff, front of the house staff, and all the kids in the high school that have stepped up and have come down here to work,”  says Shipton.

His staff includes Addie Harvey, one of the front of the house managers. “This girl stepped up, just her demeanor and her way to deal with hospitality.  Just a natural niche for that,” describes Shipton.

Shipton and the staff are moving at their own pace, to ensure they get it right.  A website for Juniper’s is in the works, and a business phone number will be available when Shipton feels the staff is prepared to handle the phone ringing in addition to reservation seating and walk-ins.

“I have a lot of goals with this property,” comments Shipton. Area residents and fine food fanatics cannot wait to see the progression of Juniper’s, based on first impressions.