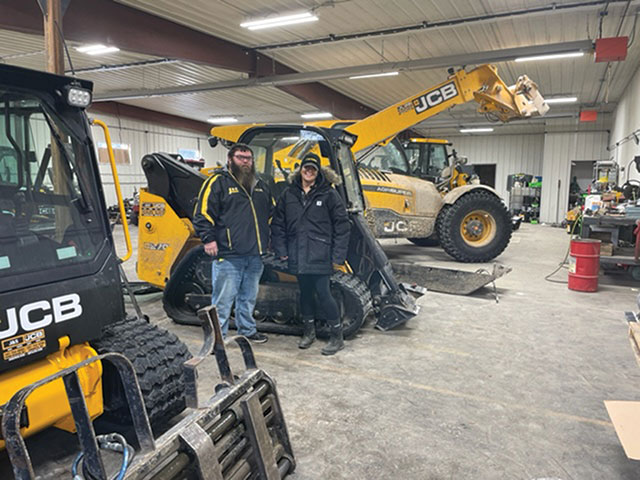 Grand Meadow resident Travis Warmka is a busy guy, but that’s how he likes it. As owner of three local businesses (J & S Repair, JCB, and Featherlite Graphics), Travis never has to worry about sitting idle and bored. He recently took a few minutes to answer some questions about how he stays busy.

Travis is the owner of J & S Repair, which operates from locations in Grand Meadow and Zumbrota. He explained that he is continuing the family business, as he stated, “Dad (John Warmka) started in ’78 in the original building. It was just a little machine shed; he started it up as a repair shop. Eventually, that evolved in to selling some machinery. He has customers that came in that wanted particular brands of this and that, and he got set up so that he could sell them their stuff. And he kind of put himself on the map with row crop cultivators, actually, which are pretty much extinct now.”

From that beginning, J & S Repair grew, along with its reputation. Travis went on, “And then back in 2006 or 2007, I came in and started selling for him, and working my way into the business.” The business continued to expand and grow, but Travis stated that John is still very involved in the business. And Travis said the philosophy at J & S Repair has always been “family comes first,” so he strives to accommodate the needs of his employees when they have family commitments. Travis added, “And I’ve got a three-year-old now, and he’s excited any time he can come down here.”

Travis summarized the expanding employee list at J & S Repair, stating, “When I started there was only one in parts and one in service, and dad and a bookkeeper. And now there’s 29 of us around here between the two stores.” J & S Repair operates a second location in Zumbrota.

As a JCB dealership, Travis is partnered with the third largest construction machinery manufacturer in the world. Travis recalled, “We took JCB on in 2017 or 2016, and we’ve taken the ball and ran with it. It’s really been a successful line for us. They sell from skid loaders to large wheel loaders, they really have a unique and wide variety.” He added, “We do very little rental, but our primary deal is sales and service and parts.”

Regarding Featherlite Graphics, Travis shared that the business opened in 1989, and he has owned it for just over a year. He explained, “My brother Troy and I own that together, and then Russ is a partner with it as well.” Travis said the decision to purchase Featherlite Graphics came about when “the stars aligned” as he recalled, “We decided to try to get it bought from Steve… and it really was a seamless transition. We basically kept all of their staff on, on the graphics side. We did not buy the paint side.”

Travis noted that Featherlite Graphics has done work on vehicles including ambulances, big transporters, Harley Davidson trailers, NASCAR trailers, and more. He said, “It’s really cool that in small town Grand Meadow, we’re putting trailers and stuff together for the big stage all over the country.”

The next growth and challenge for Travis is J & S Outdoors. He explained, “We’re actually just in the process. Hopefully in the next month here we’ll have J & S Outdoors, which we’re putting in the Grumpy’s building across the street. So we’re splitting our lawn and garden off from J & S Repair. By the first of March we should have that up and running.”

Travis shared that the customer base for J & S Repair has changed greatly over the decades. He said it began as a very local business, but added, “Now it’s really nothing for us to have a truck out in South Dakota once a week, and/or we’re up the in the metro all the time. Where the service is needed, that’s where we go.”

Despite running three businesses, Travis also has served on the Grand Meadow Fire Department for 19 years, and has been fire chief for the past four years. He added that several of his employees are also firefighters, and he quipped, “So when that pager rings, sometimes we’ll be right down to nobody in here, basically.”

As if all this weren’t enough to keep him busy, Travis also finds time to coordinate local fundraising. He stated, “I started Rock Road Bandits Charities, where we do side-by-side rides to raise money.” He mentioned several recent needs in the community for which Rock Road Bandits was able to help raise tens of thousands of dollars. He encouraged anyone interested to view the Rock Road Bandits page on Facebook, to learn more or join.

In summarizing his business plan, Travis stated, “The business was started on service after the sale. It was a service-minded, parts-minded business, and we’ve really tried to carry that through even as we’ve grown, to make sure that we’re trying to take care of the customers. He invites the community to stop in and see the changes going on, as the new shop opens.