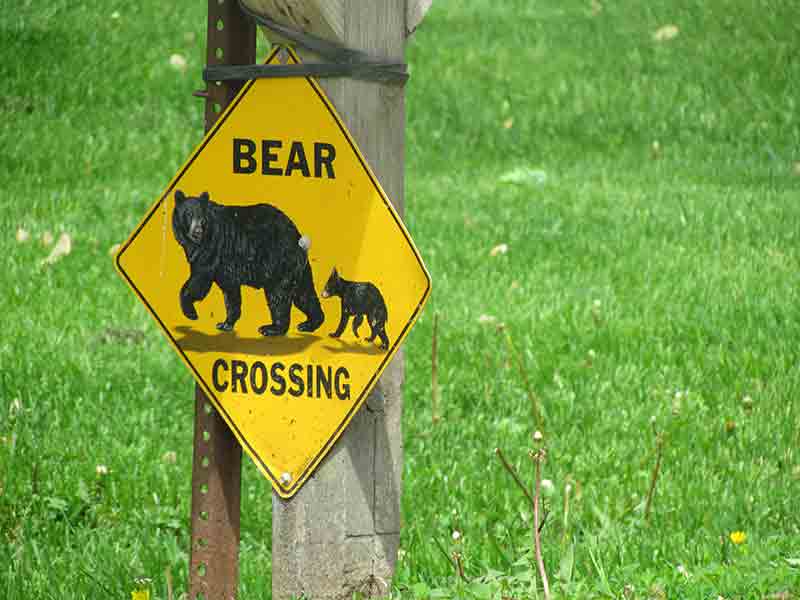 This is not the first bear to be sighted in Hesper. In June 2012, a black bear was spotted in Hesper, causing Hesper resident Debbie Nelson to post a bear cross sign to be posted on the main east to west road in Hesper.

Laura Carolan McConnell captured a one-minute video of the bear roaming near the Hesper Lutheran Church, which she posted on Facebook. The post of the video had 52.4K views, 669 shares and 198 reactions, and was posted on websites and television stations and talked about on the local radio station. The brief visit in Hesper led to a storm of funny, and some not so funny, bear jokes. The evening was quiet with no other sightings posted until the following morning when other sightings were mentioned on Facebook, including a post that the bear had made it way to Decorah, stopping to do damage to a homeowner’s bird feeders approximately two miles south of Hesper.

The big black bear made its way to Decorah, approximately 16 miles south of Hesper. He caused quite a stir as he was sighted along the Trout Run Trail bike path and Highway 9.

Winneshiek County resident Dori Frana shared that “he is moving south.” Frana lives south of the Decorah airport, midway between Ossian and Decorah. She explained, “We are moving in a week, and we have seen many critters in our backyard over the years, but never a bear.” The following day the bear made a return visit to Frana’s property.

The bear was also seen roaming around Calmar over the weekend.

The latest bear sighting was in Spillville. The City reminded everyone to be aware of their surroundings.

Even with all the excitement and sightings, there were no reports of injuries.

Residents are reminded to close the doors to all buildings, keep trash inside, remove bird feeders, and put pet food inside. Bears are hungry in the spring and enjoy an easy meal. Also stay away from the bear and let it go on its way.