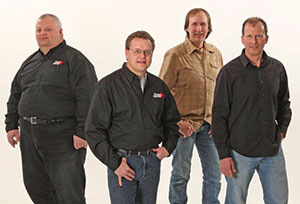 It’s not unusual for junior high kids to play around with guitars and drums and to think about being musicians. Some even dream about forming their own band some day. If you didn’t do that yourself, you probably remember classmates who did. Fun stuff, kid stuff.

What’s very unusual — “extraordinary” is more like it — is for a group of kids like that to actually pull it off. To create that band and have it become successful, playing more than 5,000 shows in a career spanning nearly 40 years. A band that would produce their own CDs, travel to gigs in more than 14 states and Canada, including “Music City,” Nashville, and become an opening act for major country stars like Taylor Swift, Kenny Chesney, the Nitty Gritty Dirt Band, and Martina McBride. Oh yeah, one year their CD Borderline got nominated by the Minnesota Music Awards for “Country Recording of the Year.” Extraordinary more than fits.

That’s the real-life story of the local band called Trouble Shooter, based in Rushford, Minn. Two brothers, Rod and Bruce Darr, along with friends Bruce Greenwood and Dennis Overland, saw their dream come true, and are still living it out with no intention — come pandemic or high water — of calling it quits any time soon.

“The beginning of Trouble Shooter in 1984 wasn’t glamorous,” says Rod Darr, a founding member and booking manager for the band. “I started playing drums in junior high. My brother Bruce and some friends got interested in music, too. We played in some local bands then decided to try to form our own. That became Trouble Shooter.”

It’s a band — Rod Darr on drums, Bruce Darr on lead guitar, Bruce Greenwood on keyboard, and Dennis Overland on bass guitar — that has evolved musically over the years.

“We played mainly country at first but when we got more bookings for weddings, street fairs, bars, and private parties, we needed to broaden out,” Rod says. “We began playing a 50/50 mix of country and rock-and-roll, playing music that had influenced us and that we personally enjoyed. Artists like REO Speedwagon, the Eagles, April Wine, AC/DC, Restless Heart, Southern Pacific, Little Texas. At one point we probably could have been a cover band for Sawyer Brown.”

Trouble Shooter’s popularity grew through the 1980s and 1990s, and they soon found themselves playing 3-4 shows a week. That was on top of holding down full-time day jobs.

“We had to make a decision,” Rod remembers. “Either we were going to pursue our music full-time or we needed to back off. We decided to go for it. We signed contracts, connected with booking agents, and within a couple of years things really took off. We hit 300 nights some years, and had a five to six-year period where we averaged probably 200. The phone was ringing; our schedule just seemed to fill up.”

The band hit the road, playing across the Midwest (“mostly country-western clubs and bars,” says Rod) and into Canada. “We were fortunate to get great opportunities to open shows for well-known stars,” Rod says. “I wished I’d kept a journal of all that, but I didn’t.”

Years went by, families grew, travel got tougher, but Trouble Shooter stayed active. “We’ve scaled back now to about 30 shows a year,” Rod explains. “I run an online auction and real estate business, my brother works at the Rushford Post Office. Bruce, who lives in La Crescent, is employed at St. Mary’s College, and Dennis has an insurance business. As guys hit their 50s, some near 60, life and responsibilities change. We’ve adjusted our schedule. We don’t bang on doors looking for shows now, but we do plan to keep playing.”

Pandemics make a difference, too. How has that affected Trouble Shooter?

“This year has been different for everything and everyone,” Rod says. “We played 6-7 times, some outdoor stuff, before the pandemic really hit. We’ve had 13-14 cancellations, but a few shows are still scheduled. We’ll see what happens.”

The effect the virus crisis is having goes beyond the entertainment scene, of course.

“We’re a very social society,” says Rod. “Not being able to get out in groups to enjoy family and friends, have fun, hear live music, it’s taking a toll on the general public. You hear about depression and anxiety. I’m hoping when the smoke clears on this thing we’ll be able to quickly get back to normal. Maybe live music will even move up a notch.”

Time off for a band may ease travel and work pressures, but it isn’t good for the music, he says.

“Playing music in a band isn’t like riding a bicycle. It doesn’t just stay with you. When there’s a long time between shows, it gets more difficult. Repetition keeps a band tight. That’s been more difficult.”

To deal with that, Trouble Shooter recently did some live-stream performances. “It helps us stay familiar with the material and puts us in front of people. We need that and we enjoy it.”

Enjoying what they do is key to Trouble Shooter’s longevity, says Rod.

“We still get together regularly to practice and play and just hang out. The time just catching up as friends and socializing may be as important to us as the music. It’s a big part of what keeps us together.”

What else has kept Trouble Shooter so successful for so long?

“We’ve always prided ourselves on producing a good musical product in a solid, professional manner,” Rod says. “We stay fresh, we learn new material, we start on time, we take short breaks, we give our audience a full show.”

Sounds like ordinary stuff. But done in an extraordinary way. That’s the story of Trouble Shooter.