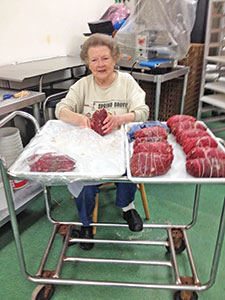 As she is lovingly known in Spring Grove, Grandma Bea is 96-year-old Beatrice (Hatling) Doely. Doely, a spry lady with a genuine personality and smart appearance, retired at the end of December after 23 years with the Spring Grove Public library.

“Bea Doely is an inspiration to everyone she meets. She works hard and never complains. In fact, she is always optimistic and cheery.  I come away from encounters with Bea with a sense of awe and respect; she leaves big shoes to fill. With all of her free time now, I  hope to see her smiling face returning to the library as a frequent patron.” Dawn Johnson, Spring Grove Library director.

Happy birthday, Beatrice! Doely was born on January 18, 1925, the youngest of eight children – five girls and three boys. Beatrice was the baby of the family. Her family lived in the Choice area during her formative years.

Doely married her husband, Carlyn, on April 22, 1944, which was also her husband’s birthday. The couple was blessed with two children, John and Barbara. John is a retired math and science teacher and coach. Daughter Barbara Schuttemier and her husband farm near Spring Grove. The family grew with the addition of three grandchildren and five great-grandchildren.

Mrs. Doely loved snowmobiling. The Doelys belonged to the Spring Grove snowmobile club. She proudly boasting that they participated in the club’s longest ride from Spring Grove to Winona, where they spent the night.

Doely attended grade school at South Fork country school between Yucatan and Choice.  A traditional Norwegian style church served as the community’s school, and every teacher was kind.

Recess was Doely’s favorite time of the day. “We all loved recess and playing games.” Favorite games included softball, Farmer in the Dell, tag, and lots of racing – Bea was a good runner! Her favorite subject was arithmetic. It was interesting to learn that the students brought their lunch to school in a syrup pail. In eighth grade, students started bringing their lunch to school in a store-bought lunch box.

Doely went to high school in Mabel, and since there were no busses from where she lived, she lived with a different sister each year in Mabel. She attended her senior year at Caledonia High School as her parents had moved to Caledonia to help her sister Elise care for her children while her husband was deployed. Doely graduated from Caledonia High School in 1943.

Even though Doely was short, she had just enough talent to play basketball in high school. She added that Rushford was the team to beat.

Between milking cows morning and night to retiring from the Spring Grove Library, Doely clocked in hours working at her sister’s restaurant in Caledonia. She also worked at the library in Mabel and worked as a personnel maid for a “filthy rich” couple north of Rochester. She spent 13 years at Northern Engraving, Red’s IGA for 23 years, and 20 years at the telephone company in Spring Grove, in addition to working at the library.

Patrick Longmire, Red’s IGA, shared, “Bea worked for us for roughly 20 years. She faithfully made rullepolse for our celebration. While working in the bakery/deli, she was always hard at it, put customers first, and got her job done!”

Two years ago, Doely was recognized as Fan of the Year at Spring Grove School. “Fan of the Year was such an honor, and it came as a complete surprise,” expressed Doely.

This introduction was made at the time of Doely’s 2019 award: “This year’s Fan of the Year can be seen on the bleachers at every home football game. She has sat through rain and the freezing cold. She has made many trips to Rochester for the playoff games. This year she even traveled to the very cold playoff game in New Ulm. This fan can be seen sitting in their regular seat at about midcourt for all of the home volleyball and basketball games. She makes her appearance at the Rochester Civic Center. You will see her sitting in her lawn chair at home baseball games. She has made lunches for some of our teams that travel to our farthest away games. She is now known for her famous brownies by some. We are pretty confident that we can say she is the oldest fan gracing our gym, as she just celebrated her 94th birthday. She is a Spring Grove Lion at heart. Just ask her what her favorite color is – red, and black is a close second. This year’s Fan of the Year is Grandma Bea Doely.”

A good friend of Grandma Bea takes her to out of town games. “I love to go to every single game – baseball, basketball, football,” stated Grandma Bea.

Grandma Bea will never admit that she has bad eyesight. Her great-grandsons, Brandon, Brady, and Brock, who live in Spring Grove, always wore red socks so Grandma Bea could tell who was on the court.

Her daughter also shared that if Grandma Bea did not show up to a game, someone would call her and let her know there was a game.

Grandma Bea’s doctor asked her how much coffee she drinks a day. “Eight cups.” The doctor’s reply – “I guess I will not tell you to stop drinking coffee.”