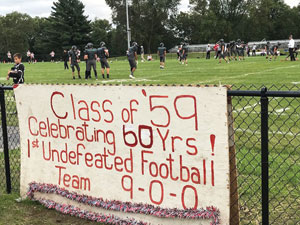 Back in 1958, the Harmony High School Cardinals football team achieved something extraordinary.  The team had a perfect 9-0 season.  And it’s even more extraordinary when the circumstances are considered.  Team member Richard Kiehne coordinated a reunion of the team and cheerleaders, and their spouses.  The get-together was held at his home in rural Harmony just before they were honored at Del Elston Field, prior to the start of the September 13 game between Fillmore Central and Faribault Bethlehem Academy.

As the friends reminisced with food, fun and fellowship, it appeared as if they were talking about events from six days ago, rather than six decades ago.  Kiehne and Arden Willford displayed newspaper clippings and photos from the historic season, and the memories flowed forth.  Kiehne stated that the 1958 team had 11 seniors and 14 underclassmen, but the team was not predicted to have a winning season, because 15 outstanding seniors from the 1957 team had graduated and moved on.  Another challenge was that Harmony’s head coach, Marv Gunderson, was in his first season coaching the team, after one season elsewhere, where his team lost every game.  So expectations were very modest for the ’58 Cardinals, with area sportswriters predicting two or three wins for the Cardinals’ season.

Attempting to find the secret of the team’s success was a slippery issue, like trying to grab a fumbled football on a muddy, wet field.  Each athlete pointed out other players who excelled, but there was a consensus that the coaching staff was the key.  Kiehne pointed out that the ’57 team had excellent athletes, “So we had some experience in toughness.”  He added, “I think Marv Gunderson just kind of pulled everybody together and said… this is your job.  You don’t worry about him, just worry about yourself.”  Kiehne also stated, “We scored by committee.  We didn’t have anybody that scored over four touchdowns for the season.”

Larry Hovey was a senior fullback and linebacker for the Cardinals in ’58.  He stated, “I didn’t have a real good senior year,” (due to a back injury).  But he added, “We had a real good, balanced team.”  When asked the secret to their success, Hovey replied, “Hard work, I’d say… Good bunch of boys.”

Arden Willford, an all-conference center and linebacker, shared his opinion on what made the season such a success, quipping, “Our coach was phenomenal.  The coach was it.  We were a bunch of brats.”  He went on to say that Coach Gunderson did a great job of teaching the fundamentals of blocking and tackling, and he recalled how the coach knocked the wind out of him many times during practice, despite the fact that the coach was not wearing any pads. When a teammate mentioned that Willford had amassed a large number of tackles throughout the season, Willford smiled and said, “The last guy up always gets credit for the tackle.”

The ’58 Cardinals ended up winning all nine of their games, winning six by shut out.  They scored a total of 153 points, while giving up only 31.  Unfortunately, in those days, there was no playoff system, and the conference had been split, so Harmony was named co-champions, along with Caledonia, but the two teams never got to face off.

In describing Coach Gunderson’s coaching style, Willford stated, “We always said he could light a fire in a pail of water.”  He went on to describe the game against Rushford, saying, “They had huge Norwegians… and I only weighed 150 pounds.”  He recalled that when he walked up to the line of scrimmage at the start of that game, “I looked down at those feet, and those were the biggest football shoes I’d ever seen!” Willford went on, “We did a poor job in the first half.  We went into the locker room (expecting a stern lecture), and he (Coach Gunderson) never came in… Finally, he came in and said, ‘Well boys, you know what you’ve got to do,’ and he turned around and walked out…  We won.  We knew what to do.”

In football, there is always an element of luck, as well.  Jim Berning told of a game in which Harmony was trailing late in the game, when Harmony’s running back fumbled the ball.  Fortunately, the ball bounced right back up into his arms, and he ran it all the way in for the winning touchdown.  But in observing the reunion and celebration, it was clear that the true victory was the bonds of friendship forged over 60 years ago, and still going strong.  As the teammates and friends laughed and told detailed tales of their magical season, it was obvious that handshakes and hugs were more important than handoffs.  And that’s what made the ’58 season truly special.