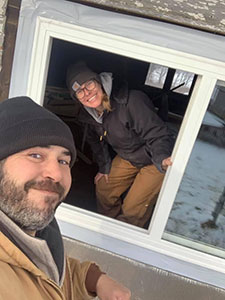 In the fall of 2019, Matt St. Mane (from Lanesboro), was driving on Scenic Byway Hwy 16 between Preston and Wykoff.  He was headed to Grand Meadow where his daughter was playing volleyball when he spotted a for sale sign in front of an empty, run down farm house.  Relieved of its exterior paint for many years, the 1926 American Four Square style house sparked his imagination.  He sent his wife Rubianne a photo and she quickly replied, “NO WAY.”  He convinced her to have a look anyway.  They had to view the house in daylight since there was no electricity.  Rubianne, deathly afraid of mice, declared if she saw one, they would not be returning.  They both immediately saw the home’s potential and saw no mice!  Matt, owner of St. Mane Construction, always dreamed of fixing up, possibly even flipping a house.

The last people to live in the house were Art and Doris Bender.  Rubianne loves to listen to stories people share about buying eggs on the honor system (putting money in a teacup) from the Benders and remembering Doris’ delicious angel food cake.  The house has been unoccupied for over 25 years. The Schmidts and Eickhoffs have owned the property since the Benders, but they only used the farmland.

The seven acres Matt and Rubianne own include the outbuildings – a big barn, a smaller barn and three grain bins.  The 2½ story house, a classic American Four Square, is a boxy home designed to maximize interior space.  Typically, the kitchen, living and dining rooms are on the first level, four bedrooms are laid out symmetrically on the second level, and the third level is one big open space with one to four dormers.  This pretty much describes the St. Mane house.  It originally  had three dormers, but the St. Manes added a fourth.  The third floor will be the master bedroom suite with a master bath.  The four dormers add a lot of natural light to this space.  The house originally had five bedrooms and one bathroom.  It still has five bedrooms, but two more bathrooms were added for a total of three.  Another feature of an American Four Square is a large front porch with big front stairs.  A man whose parents were friends of the Benders gave Matt and Rubianne some old photos of the house when it still had its front porch.  Matt plans to build a new front porch modeled after the original.  Rubianne can’t wait to relax on a porch swing. The second story also has a balcony off the rear of the house with a picturesque view of the barn and grain bins.  The original tin roof over the back entry was replaced with a rubber roof and a floating deck.  Before they added railing to the second story balcony, they took advantage of the access to lift the new sheet rock up and into the higher levels instead of having to schlep it up narrow staircases.

Matt and Rubianne took possession of the house last November.  They felt pretty confident about their purchase, noting that the structure was solid and the doors all hung level and swung true.  One of the first tasks was replacing all the windows, which they did in two-degree weather with just the warmth of a small space heater.  The house had no heating installed yet.  They had to take frequent breaks to thaw their hands and faces.  “It’s been a ton of work,” says Rubianne.  They  stripped 27 layers of wallpaper, tore out the ceiling, opened up the kitchen and so much more.  The home is essentially like new- the electrical, plumbing, septic, well, insulation, and roof have been completely redone.  The exterior cedar siding is original and has been repainted.  The kitchen area was opened up by removing some built-in cupboards and some reclaimed rustic barn beams (the smaller ones savaged from the barn on the property) separate the kitchen from the dining space.  Fir and maple flooring throughout the house is all original as well as the vents, baseboard and window trim.  Matt pointed out that the back side of the baseboard is stamped with the words Wykoff, Minn.  Matt and Rubianne are thankful for the assistance with this project provided by Larson Well, Stephas Plumbing and Heating, Aaron Dybing, and lots of family.

The St. Manes are planning to move in instead of flipping the house.  They’ve fallen in love and have many more plans for the property in the future.  The human family hasn’t moved in yet, but the house does have a couple residents; Ivy and Lucy.  These two are keeping the place mouse free.

Matt and Rubianne are hoping to have an open house mid-October.  St. Mane Construction Facebook page has more photos of the remodeling project.